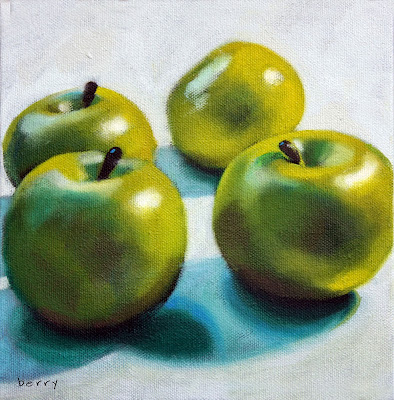 Still working and having a good time! And right now, that's all that counts. I'm stayin' out of my head and taking note that when I listen to the ego shrieking I cannot be concentrating on what I'm doing! That right there is 90% of the problem I think. I've literally begun talking myself through each stroke and next step. It's interesting and keeps me focused on what I'm doing, not what I think about it. Nice.

It's nothing short of dee-lightful to look out of the studio window and see leaves on the trees, hear the birds singing, the sprinklers going. Gotta be the spring! 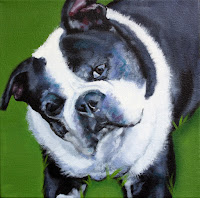 Anyway, had a commission to do of a pup and although I found the reference wasn't optimal I think it came out okay. It did give me a chance to dust off my artistic license though. Imagine my surprise... it hadn't expired!

This is Moe. I hope the giftee was pleased.

I am excited about what's on the easel next. I am a devout lover of shellfish, especially steamers. When I bought some the other day, I noticed, as they sat patiently in the sink awaiting a good rinse, that there were some incredible colors and shapes going on so I snapped a few and have one in mind to begin tomorrow.

Sure feels good. I'm grateful but with all my spouting about "my thoughts creating my experience" —apparently the lull is all my doing. Gee Suz...ya think? But, see... therein lies the rub. Does one go all military on oneself, attempting to force creativity or does one wait out the drought—accept what is and wait patiently and optimistically until it's over? Probably no hard rule to that. Depends on the individual. I'm not the least bit disciplined so I would think it's rather easy for 'lil suz to give in and grab the remote more often than not. Still.

Anyway, I need to say this. I am more in love with Timothy Francis Berry than I was yesterday or the day before and I haven't laid eyes on the man in 3 years, 3 months and 3 days. He continues to make his presence known in the most surprising and clever ways. I am so very fortunate!

Thanks so much for dropping by, it means a lot!
Posted by suzanneberry at 12:42 PM 10 comments: 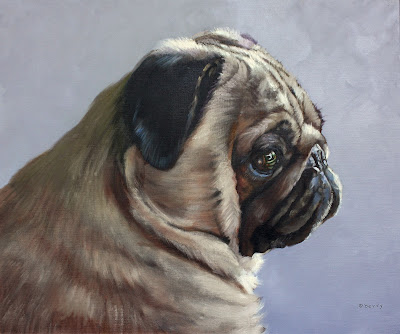