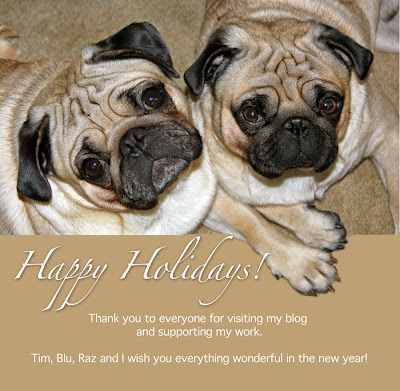 But...um...ouch! Dental surgery hasn't dampened my spirit in the least, however,I do apologize for not thanking everyone who stopped by to leave a comment this past week. Although a tad uncomfortable, I do get to sit in bed while Tim takes care of almost everything! Merry Christmas to me!

The boys are all snuggled up with me whilst himself rushes about preparing the most exquisite soups, smoothies and shakes while I sit happily in bed, all decked out in my brand new red holiday jammies—complete with feet—supported by lots of pillows and surrounded by my favorite books, magazines and all of the remotes. I mean really, what more could I ask?

We'd like to wish everyone joy, abundance and peace in the New Year and say that we sincerely hope that somehow we will all find a way to live in peace and support each other in every way we can. Thank you from the bottom of my insecure little heart for all of your wonderful comments and we hope you have a wonderful day, whether you celebrate that special birthday or not!


Joy to the world! 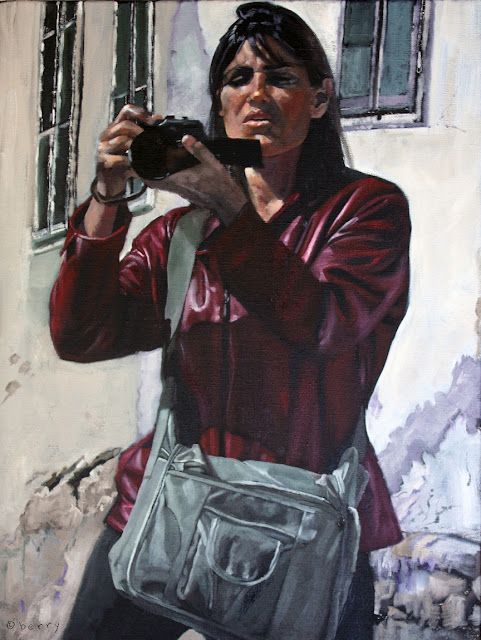 
This portrait, a favorite painting of mine to date, has happily provided me with another opportunity to feel rather pleased with myself! Sorry mom.

However, I also must give props to Mike Rynearson for one of the most incredible reference photos I've ever had the pleasure of working from. Drop by Mike and Deirdre's site and enjoy some of the most beautiful and moving photographs from around the world that I've ever seen.

The subject of the portrait is photographer Deirdre Hamill, daughter of famed author, newspaper editor and columnist, Pete Hamill, who, as history has it, was also a painter in the early days of his most illustrious career.  A few years back, on a long car trip to a wedding, I read Pete's memoir "A Drinking Life" to Tim while he manned the wheel. The book was an honest and unflinching look at his life to that point, and we both enjoyed it immensely.

This second portrait I did of Deirdre was chosen as a Christmas gift to her father which he received last week. You can imagine how I felt waiting for his reaction. Would he be pleased? Would he "see" his offspring in my brushwork? Tense. I was tense!

However an email from Mr. Hamill himself soon put my fears to rest, big time!  I will treasure his words for the rest of my days!

And he was kind enough to allow me to use his FaceBook post about the painting for shameless self promotion, which incidentally, I am not above doing! 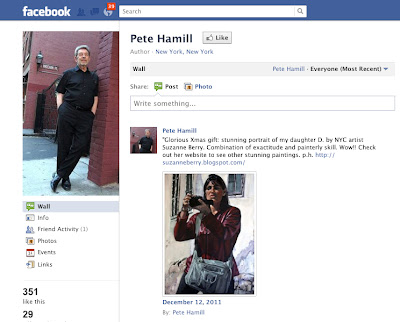 This commission will remain in my memory for some time to come! Thank you Mike, Deirdre and Pete! 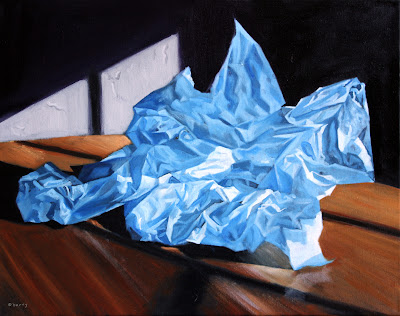 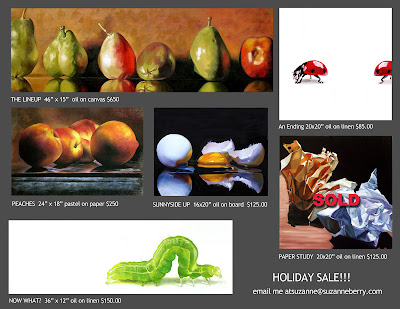 Just in time for the holidays! Still need more room! Just email me if you see anything you'd like!
Thanks for stopping by!
Posted by suzanneberry at 8:14 PM 8 comments: 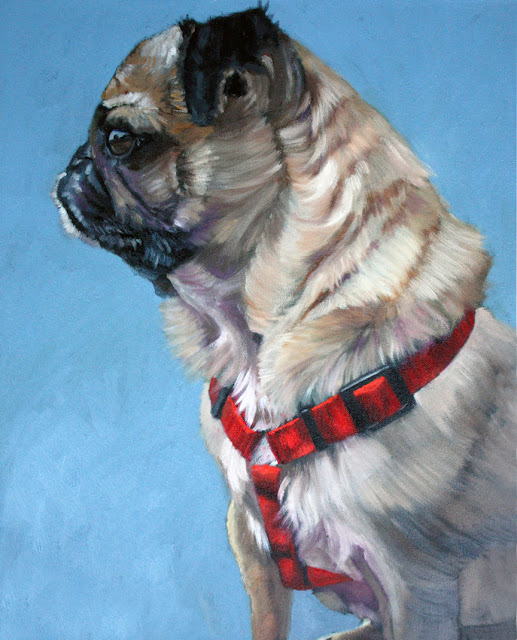 
If you’ve been a follower of my blog over the last few years, you may have surmised that my feet are not at all planted firmly on solid ground. Admittedly and happily, I am not at all convinced that what we see is exactly what we are.  And given the recent quantum physics theories of time being an illusion and form becoming solid only when our eyes rest on it, I’m feeling pretty confident that when we all wake up, “life” will have been a sometimes joyful, sometimes terrifying self-imposed dream.

With that planted firmly in mind, it is my pleasure to announce that the portrait above was painted as a Christmas gift for a dog. A dog I’ve never met, at least not in person. Her name is Tweedles. Tweedles has a blog: http://tweedles-georgie.blogspot.com/. I am a follower of her blog. Admittedly, spending every single waking and sleeping moment with our two pug pups, Blu and Raz Berry (who both have a crush on Tweedles by the way), has had a profound effect on me. I am, as Oliva Newton John warbled to John Travolta in Grease, hopelessly devoted. I enjoy just watching them exist. That said, I believe even if I didn’t have the pleasure and joy of being a pug pet parent, I would still be head over heels in love with Tweedles.

Maybe it’s the wide eyed innocence of her poems along with her belief that we are all­—including the critters, trees, air and oceans of the world—entitled to love, compassion, care and respect. Maybe it’s knowing that whenever I visit Tweedles blog I will come away with a smile, even if news of one of her close friends crossing the rainbow bridge is the topic of her post that day. She has a way of putting everything into perspective, of conveying that even though she’s sad sometimes, in the end, everything is and always will be fine, no matter what appears to be going on in the outside world. And, it ain’t just moi! Miss Tweedles gets more comments left by admirers than I could ever hope to, so clearly, I’m not alone in my admiration.

To be sure though, himself is a tad wary. He’s fully aware of my cosmic muffin tendencies but reading a pup authored blog and writing emails to a dog—even if she is a pug— has earned me more than a few raised eyebrows and curious glances. He was even prompted to ask recently, somewhat tongue-in-cheek one hopes, if I was indeed aware that, in reality, I was communicating with a person and not a dog. He does get points however, for following that rather cheeky comment with:

“That’s one of the reasons I love you. You have the ability to write emails to a dog and fully believe you’re communicating with her!”

Ummm, thanks...I think! I was a bit startled by his statement and when I replied, “Of course I do!” I wasn’t lying. I mean I know that Tweedles mom writes the poems but for some reason it’s easy for me to make the leap of faith that indeed, those words spring directly from the eternally innocent mind of Tweedles herself! Mom only types them in for her. Again, in my defense, spending each and every day with the boys might well be a contributing factor in my ability to overlook any human complicity in Tweedles communications, there is a definite freedom in interacting with another species. There's a certain fearlessness I don’t experience when interacting with homo sapiens. Not even himself!

When getting to know humans through emails I always break out into a sweat while typing. There’s the ego-based need to appear clever, cool, interesting, intriguing. The worry that I’ve revealed too much (that ship's pretty much sailed hasn't it), or said something amiss. In an effort to be cute have I clumsily scoffed at some deeply held belief?  Even now I somewhat anxiously await a reply from a colleague hoping I haven’t revealed a truth that put them off.

This never happens with Tweedles. I can tell her how much I love her, how happy her posts make me and how adorable she looks in her pumpkin hat without fear of rejection or judgment. 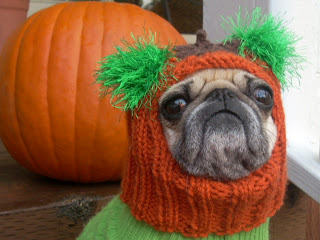 I can read her poems and feel hope for the future. I can even believe that she is indeed the author of said poems without any fear of reproach or ridicule.

But then, maybe it’s just me. I am a bit left of center and a tad idealistic. I never did understand why Rodney King’s plea of “Why can’t we all just get along?” became a world weary punch line for cynics and sitcoms.

Imagine for just a second what life would be like if we could. Miss Tweedles does...with every single post.

Yeah, I know. You’re due back on planet earth. Thanks for stopping by and I hope you all have a wonderful weekend. 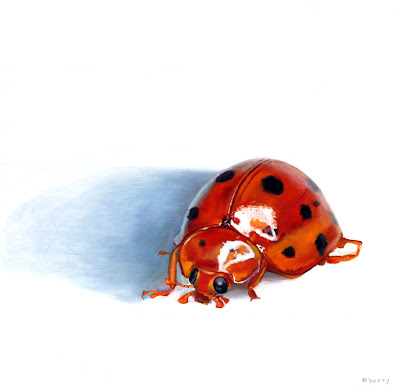 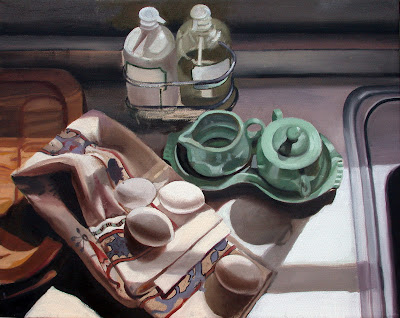 I haven't posted in a week and nothing is near ready so I thought I dig into the past and see what was there. This is about six years old. Not finished. I got discouraged. Why I don't know. It's funny. When I see work that I remember feeling awful about I'm left wondering what was so awful. Must have been an attack of the dreads.

This past weekend I freshened up a bee that sold and I remember, when I originally worked on it, feeling very discouraged. I barely finished it. But when I spruced it up, added a little definition here, a hint of a highlight there, I was quite satisfied.

Distance. That's the ticket. I used to throw half finished work away in disgust. My mother-in-law once picked a still life I'd done out of the garbage, had it framed and hung it in her living room for years. I'm so silly. All ego and all silly. Now? Now I'm putting the dread paintings away for a sunnier day. Nothin' like a fresh perspective.

Who knows? Maybe I'll rescue this and finish it. Ive been using it to plug up a hole the boys made near the bottom of the screen door until we actually make it down to Home Depot to replace it— which could very well be this weekend.

Enjoy the evening and thanks so much for stopping by.