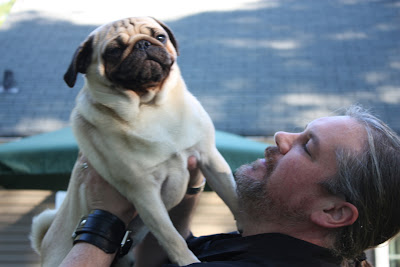 NFDP
Tim with Blu about 2 year ago

I sat in bed this morning with my favorite new book, the boys fighting for prime real estate on each shoulder when I heard the most ungodly noise.

It was either a plow, scraping the pavement in search of snow now long gone, or there had just been a very nasty auto accident. I bounded out of bed, pulled up the blind and peered out the window. All was very quiet now, but I saw two large SUVs silently coasting slowly away from each other in opposite directions, like two big burly prize fighters retiring to their respective corners following a violent meeting.

My heart raced as I fumbled around searching for the phone to call 911. After reporting the proper coordinates, I hung up and threw on my sweats and raced downstairs and out the door to see if I could do anything to help. Outside, a passerby was frantically running from corner to corner searching for street signs where there were none. I yelled over to him that I had already reported the location and the police were on their way. He said the two drivers seemed shaken but alright when I asked if there was anything I could to to help.

I stood for a few moments to access the situation and realizing there was nothing I could do to help I  returned to my front door. As I reached for the doorknob I realized that I had made a similar, panicked 911 phone call almost one year ago to the day after scrambling, terrified out of bed. The only missing component this time was the sick feeling in the pit of my stomach over what I knew I would find when I reached Tim's side.

Can it possibly be a full year?  So many thoughts, so many different emotions. I sat and thought about it as I watched more emergency vehicles and police cars arrive before returning to my book.

Then, in what seemed like no time at all, the manic running about, the flashing lights, the concerned on-lookers were all gone. It was as if nothing had ever happened. Take away the dented cars and wounded drivers and it's as if it never happened....

"Would you take Mrs. Berry outside so that we can take Mr. Berry from the house?"

My friend, who had rushed right over when I called her that morning, gently took my arm and guided me to the patio outside. Once there we chat, I can't recall about what. I'm dry-eyed, composed, watching myself from across the yard wondering when this horrible nightmare will end so I can wake up and tell Tim how awful it felt. I'm reminded of the many times I joined her on the patio while she grabbed a smoke during a break in our jam sessions with her husband. Only once, for one very brief second do I let the horror in that Tim is being taken away from our home for the very last time by strangers. They are carrying him down the very stairway we'd climbed just hours ago for the very last time.

"This is now a crime scene Mrs. Berry."

I watch the Long Island Medium on TLC constantly. I feel comfortable with the bereaved. I can relate to every word they say, every emotion, longing, every fear. I used to avoid everything that reminded a loved one could disappear in one blind second, never to return again. A friend of ours wrote recently to apologize, calling herself a weenie for not being able to come see me, admitting that if it could happen to us it could happen to her and she wasn't prepared to face that. I so appreciated her honesty knowing I would definitely get my weenie on if the situation were reversed.

We were a unit. If you saw one, you saw the other. We'd rejoice at the sight of one another if we unintentionally ended up in the same isle of a supermarket we were shopping in, as if we hadn't seen one another just moments before.  We were as amazed as anyone who knew us how perfectly we fit together. We developed our own language, would understand each other fully with a fleeting glance and could even communicate without speaking.

And so on the one year anniversary of Tim leaving us, it dawns on me how foolish it would be to let a little thing like death keep us apart. Seriously. I'm getting the hang of this "long distance" relationship thing. I wear my wedding ring and his. I send myself flowers complete with cards from him on fitting occasions. I have conversations with him constantly, laugh out loud at memories we shared and more times than not here lately, feel very comforted and content.

Friends urge me to get out, move on, get back in the game, get back on the horse and all manner of "new start" sports metaphors and I so appreciate their caring.

But I am very much still very married to Timothy Francis Berry and will be until the end of time and beyond. You know when you've found THE one. There's a feeling of complete certainty that leaves not a shadow of a doubt that there isn't anything that can keep the two of you from being together. Not age difference...not race or ethnic background...not family or well meaning friends...not religious differences, spiritual beliefs or lack thereof. Nothing. Not even death! And as the shock of his leaving becomes more and more a reality, it becomes clear to me that indeed, he's never left.

We are one forever, until we meet again my love, you are my heart.
Posted by suzanneberry at 10:23 AM 26 comments: