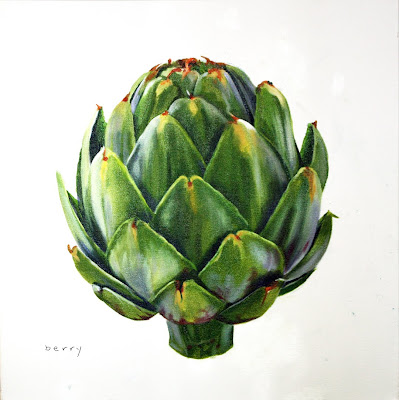 I'm diggin' the white canvas thing, again.  I have Gwen Bell, http://gwenbellsdailypainting.blogspot.com/, to thank for this artichoke, and any that follow. Ms. Bell painted the most alluring bunch of asparagus, set on the most inviting shade of lavender I've ever seen, and it's been in my head ever since. Obviously it's too late to paint the perfect bunch of asparagus, so, I settled on artichokes. Amazing plant. Veggie. Fruit. Whatever, it's got so much goin' on and actually resembles the tip of a very, very large asparagus spear does it not? I'll be doing two more of these in different positions. More angst-free painting! A nice break in-between commissions and auction pieces. Thank you Gwen! Quite obviously, you are an inspiration.

THE BEST THING THAT ANYONE HAS EVER SAID TO ME!

A clumsy segue to be sure.

I have very recently heard of a friend from the past who I've been thinking about for a while now. It always happens that way doesn't it? Gives real credence to the theory that your thoughts create your experience, no? So, anyway, this woman, who was in her early twenties at the time, was a secretary waaay back in the day in the art department at the newspaper where I was employed. I always thought she was very cool, we got along really well and shared many a carafe of wine over lunch.

It wasn't too long after we attended this friend's wedding that trial husband left me and our 5 year marriage. Let's call him TH from this point on, shall we? I was quite the mess. The morning TH announced his departure could have easily been a quality sit-com segment now that I think of it. There I was, decked out in my finest white and red horizontally striped, terry cloth footsie jammies, complete with button-down trap door in the back, sweeping the kitchen floor. (I had passed chubby about a month before and was well on my to pushing maximum density at the time). A head full of huge, Easter-egg lavender, beer can-sized plastic rollers completed my ensemble. I believe the broom was lime green with white plastic bristles. Anyway, as I swept, TH took up residence on the couch in the den, as usual, which was within earshot of the kitchen. Suddenly he mumbled...

You get the idea. Anyway, being as how our union had fallen on hard times I thought, yeah!...good idea! We need some time apart. He was stunned by my reply and blew by me like a shot to throw some belongings into a few paper bags and was out the door and in the car before I could utter another word. The fact that I had just said that so he'd snap out of it and see the folly in leaving a catch like me didn't help my very newly shattered ego, at all!

Long story short...again, too late...I realized in no time, the marriage, dysfunctional as it became, was my identity. It made it alright to be me. I was pathetically dependent back then, which made him feel needed in the beginning, but it became too much and he was forced to leave. It was just what we both needed, he was very brave. Although at the time, I thought it was the end of the world and he was a total and complete poop-head. We weren't even speaking and had no business staying together, but, a warm body in the house was really, really, really conspicuous by its absence and I was shaken to my very core. The universe had my full attention.

Anyway, I dragged myself around for months, feeling like I was made of glass. If someone sneezed or spoke too loudly, I'd shatter into a million pieces.  I couldn't eat or sleep. I imagine I wore everyone in the office out. So, one day, I was sitting at the Atex terminal, which was in front of my friend's desk, typing in some copy for an ad. We were alone in the room.

"How ya doin' Walk?" My last name was Walker at the time.
I heavy sighed and whispered that I was not doing well. I waited a beat and then heard myself say...
"If he doesn't come back, I think I might kill myself." Clearly I was prone to melodrama back then. Some say I still am, but I digress.

I don't know what I expected her to say or do at the time. She looked at me, narrowed her eyes, tilted her head to the side, breathed in heavily, let it out and said nothing. Picking up a bunch of papers, she tapped them into obedience on her desk blotter, set them down and planted one hand on either side of the pile. Pushing herself up and out of her chair, she then looked down at me and very casually said...

"Well Walk...I'm gonna miss ya." And with that she left the room, her high-heels clicking on the linoleum floor, the door closing loudly behind her.

And I was left, sitting there, fingers still poised over the keyboard, those ridiculous words I'd just uttered, hanging there in the air and echoing in my head. Happily she never mentioned the exchange again. Nor did I.

It wasn't long after that tidy little dressing down that I lost the sad sack attitude and became a newly svelte, "secure-in-my-own-skin trainee,"  preparing myself to eventually become the woman himself would ultimately not be able to resist. I brought myself to that party, my whole self and happily, it's still going on. Been goin' on for seventeen years now, in fact!

And so, to this very day, that my friends, is the best thing anyone has ever said to me.
Posted by suzanneberry at 3:24 PM 18 comments: 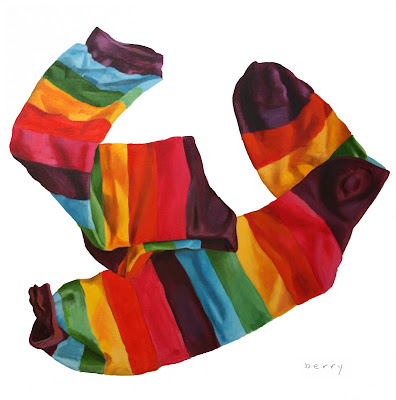 Sockdance
24x24"
oil on canvas
$500
I cannot believe it's Feb...blah...blah...blah..and time for another challenge! I'm trying not to begin with the same old reflection each month, but the second my fingertips hit the keyboard, I hear it in my head. And yes, I do have to say something to the effect of.."can you believe how quickly time flies." Sorry, I can't seem to help myself.
Anyway, here we are with another challenge. I had a lot of fun with this one. I went online, and ordered the most outrageously colored striped socks I could find, the day Diana Moses Botkin announced the theme. I thought about concepts, tried them on and shot my tootsies, with and without my Frankenstein flip-flops, hung them off the chair, threw them in the air and subsequently tied them around a roll of paper towels. Then I thought that nothing would show them off better than a plain white background, much like the bugs. So I shot them on the copy board (found a use for that, thank goodness) and planned to include a shadow, giving the viewer the feeling they could be plucked off the canvas. However, as the painting continued, I thought better of the shadow, and the socks began to appear as if they'd been thrown up in the air and caught mid-flight. Ooo, I feel a series coming. They're so much fun to paint, angst-free in fact.
I really loved what everyone did. I know I always say that, but I mean it. The unique way each artist approached the socks is so intriguing to me. I'm still searching for my artistic identity and I feel each artist in the group has found theirs. Enjoy.
Sockdance
24" x 24" (61.0cm x 61.0cm)
oil on canvas
$500 plus $15.95 shipping and handling in the US
E-mail me for International shipping rates or other inquiries. 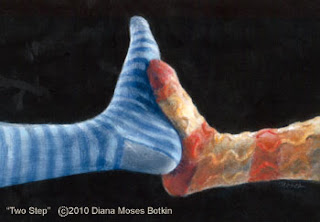 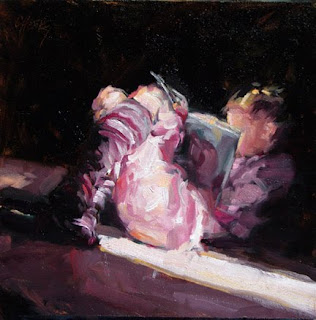 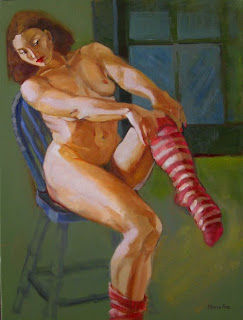 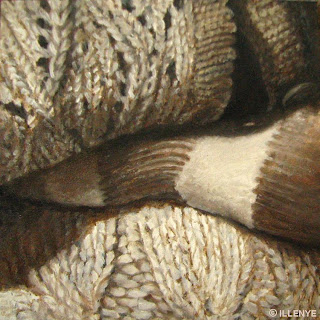 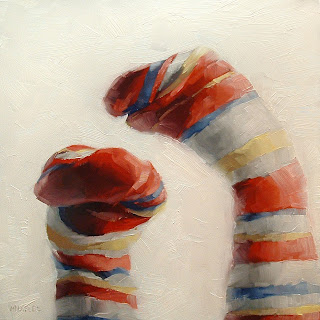 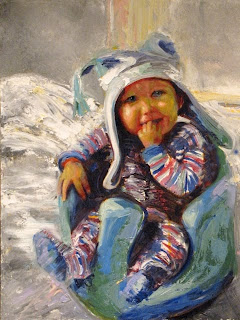 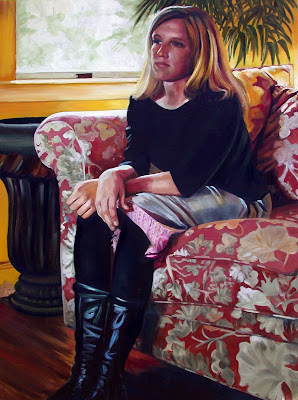 24x36
oil on canvas
NFS
This painting has been posted before, early in my blogging which seems like a long time but was only about a year and a half ago. Kate is himself's only sister and a very cool person. I miss her. I miss the family.
This was done as a monthly contribution to our now defunct painting club that I started with a co-worker back in the day. I am so grateful for that period as it really got me back into the game again in earnest. My process is so different now. I actually used to paint a section at a time, literally finishing up before I moved on to the next area. It was almost a paint by number type of thing. Now I would paint the background color of the couch for example first and put the pattern on top.
I've been working and am in fact really excited about this month's challenge. I really love the subject matter chosen this month by the challenge originator Diana Moses Botkin. I loved it so much in fact I'm doing 2 more!
Been going through a strange time. The pups are doing well but since the fall I've had to change my schedule a lot which made for less time in the studio. We'd just gotten to the point where they could walk up and down the stairs by themselves and just tear ass around the house and yard like speed demons—which made for longer nap times. Now, not so much, but I'm a willow, I can bend. Ok, so I've been more like an oak, but, I'm getting better.
Posted by suzanneberry at 3:44 PM 9 comments: 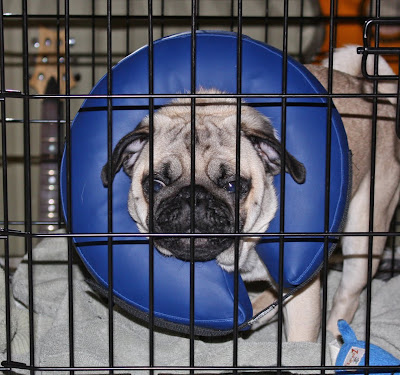 NFDP
That "cone of silence" had to go. We found this collar online and when we put it on he time traveled from the Elizabethan era to a Titanic survivor. I mean really, can you stand it? He's in the middle of giving his little bro what for here.
He's doing really well, thank you for your kind wishes. He doesn't mind all the crate time too much since we replaced that cone with this inner tube. Now he can hear, party with his bro and keep his cone lid free of basically everything!
Posted by suzanneberry at 11:16 AM 12 comments: 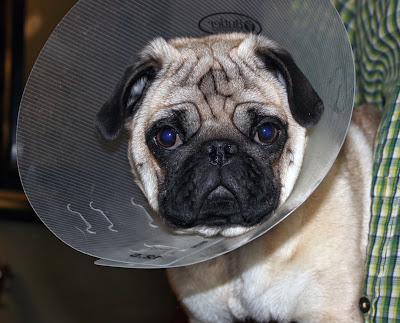 NFDP
Dressed in period costume, awaiting his "on set" call, Raz the Daz Man, prepares for his big screen debut in the highly anticipated remake of Elizabeth, Queen of England
How unhappy does this poor baby look? Poor baby. This thing will be on for at least the next 2-3 weeks. He's just glad to be home and we're overjoyed he's back. Now, how to keep him quiet for the next three months!
We decided to have a hip replacement when the doctor informed us that the procedure we wanted done would leave him with a limp and some discomfort on rainy days. He came through everything really well and managed to steal everyone's heart at the hospital.
Welcome home sweet boy!
Posted by suzanneberry at 7:30 PM 9 comments: