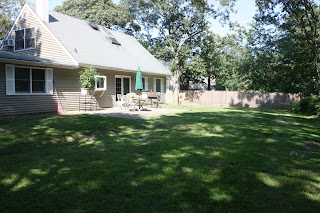 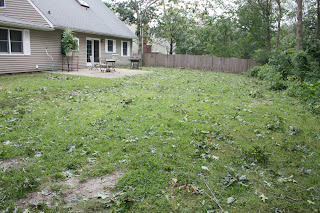 We are so grateful and thank you all so much for your good wishes.
Posted by suzanneberry at 7:09 AM 13 comments:

CRABBED AND AN ANXIOUS WAIT! 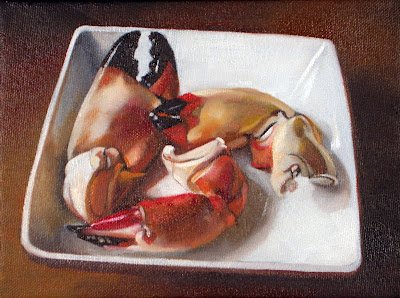 I looked through my gallery to see if anything was suitable for this weekend's visit from Irene. Couldn't find anything but since there is a pretty good chance there will be a substantial amount of water around I thought she might like these.

Busy week. My very first earthquake and now a dangerous hurricane! I shouldn't even call it a quake, we just shook for a bit, but like everyone's first time, it does give one pause. And now, Irene. It's weakening and hopefully won't do too much damage although the warnings are dire and scary. We'll see. Mother Nature is not at all pleased. And who can blame her?

Enough! I heard a quote the other day while watching a documentary on mixed marital arts of all things. George St. Pierre is the UFC Welterweight Champion. He's a real gentleman, he doesn't trash talk, he reads Nietzsche, keeps a stuffed unicorn given to him by his late Godmother at his bedside and he is very, very focused. He lost his first title defense fight because he didn't take his opponent seriously and got caught up in the partying and the hangers on. That was in 2007. The day after that fight he was back in the gym. He hasn't lost a fight since. He believes in himself and he believes in hard work. He understands that everything originates in the mind. If the mind isn't focused, whatever it's doing won't be either.

His career and ascent was juxtaposed against a close friend and fellow fighter whose winning career was on it's way down. An amazing fighter, at times he would just freeze in the octagon and suffer vicious beatings. It got so bad he eventually had to quit fighting all together. Their two very distinctly different mindsets were fascinating to watch.

During the movie, Mr. St. Pierre made a quote that lit me up like a pin ball machine. He said..."I view my career more like a marathon, instead of a sprint. I am not defined by any one fight." Hello! It stuck a chord with moi because I keep thinking that there's this one painting, waiting in the wings, perfectly done that will define me as an artist. Besides making no sense, that's not really how it works is it.

In this era of instant celebrity one sees how easy it is to become famous and make lots of money for doing absolutely nothing at all. In a recent pol, when asked what they want to be when they grow up, 60% of the teens questioned chirped..."famous!"

That said, I think I've been sprinting. I think I need to train for my marathon.

I wish every single person, pet and home a safe passage through the storm and everyone else a great weekend. And, if we have power I'll "see" you all next week!
Posted by suzanneberry at 3:00 PM 18 comments: 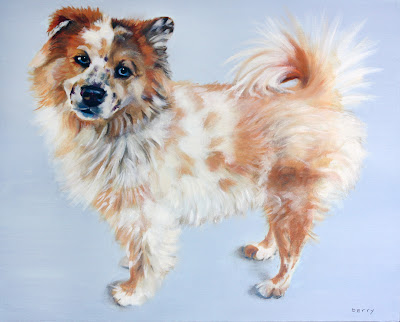 He had just been calling from work to tell me about his lunch with an old friend when he felt the building move and saw the blinds swaying. Freaked us both out. I haven't been the same since. I was going to write some thoughts I had about doubt with regard to artwork. I think I'll save that for another time. Right now, I'm trying not to wilt every time a big truck rumbles by.
Posted by suzanneberry at 12:00 PM 16 comments: 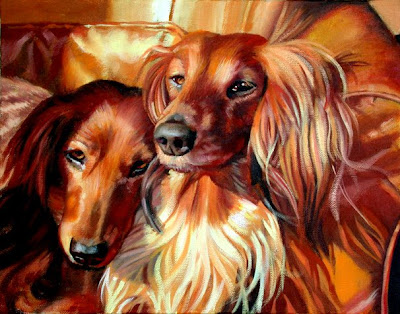 I'm back in action!! It looked a tad scary for a while as the folks at the Genius Bar had to replace the hard drive, the logic board and the video card because everything they tried didn't work! You can be completely sure that I will be backing up EVERYTHING!! It's taken poor Tim all day to reinstall and locate and he's not nearly finished. You never think you'll need your bookmarks, all your passwords are gone. And gee, guess what? My password/address book must have sprouted legs and made good its escape because I can't find it anywhere. I should be use to it. At this point I've abandoned all hope that I'll ever be the tidy type, the type that always knows where everything is. Why stress? What's the point? It'll turn up and in a month or less we'll find our way back to all new stuff...which will, without a shadow of a doubt be backed up times ten!

The painting has been posted before. It was my first European commission. Just wanted to post something cuz every time my title page pops up there's a really great painting by Robin Cheers  because I missed challenge this month!

I'm really excited about the commissions I'm finishing. I accidentally found the most amazing linen surface with a tasty tooth, and the application of the paint is bordering on the sensual, if you'll pardon the bawdy imagery. I'm actually feeling, dare I say, quite satisfied with my progress. I'll have to wait to post two of them as they're gifts, wouldn't want to spoil the surprise.

Anyway, thanks for listening and for the support during my time of computer interuptus. Hope the weekend is going well!
Posted by suzanneberry at 7:19 PM 18 comments:

What with the temporary loss of my stuff (still nestled safely on an external drive) and no word yet from Apple as to when we can get the iMac back, I find myself a tad more confused than usual! And more importantly, with two commission deadlines looming, I was forced to forgo my challenge painting this month.  I must say, as I write this I'm feeling rather left out, especially posting these great responses to this month's theme—paint "something in or on your car"—given to the group by Sharman Owings.

Heavy sigh! My sincere apologies to my challenge mates for punking out. Enjoy... 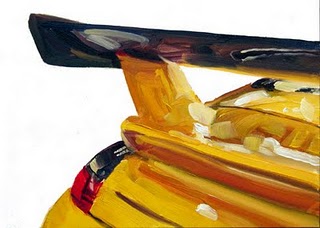 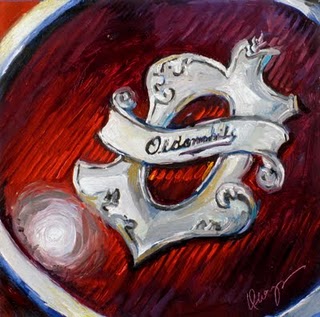 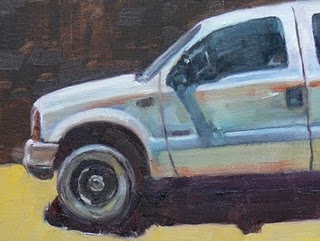 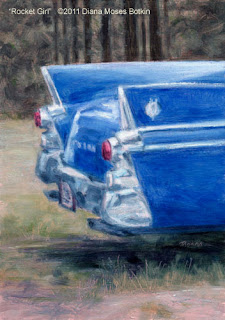 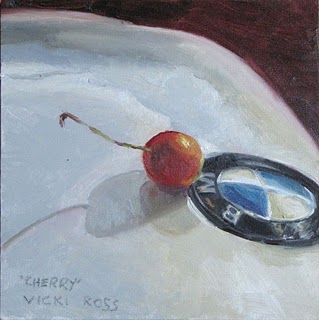 The little creepy crawlers are completed!

Still no word on the condition of my Mac. I miss it. Funny how attached we've become to these electronic devices. Ever think of how lost we'd be without electricity?

Have a great weekend and thanks for stopping by!
Posted by suzanneberry at 4:01 PM 14 comments: 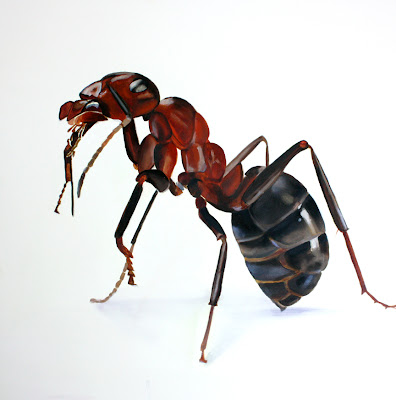 At least I have my stuff! Thank you computer wiz, magic mac dude Jon! You are a genius!
Posted by suzanneberry at 3:08 PM 17 comments: 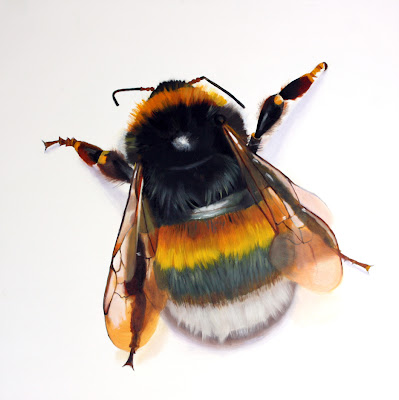 Happily a collector requested a trio of bugs and this is the first one I've completed...a very furry and somewhat jolly bumble bee! An ant and a fly to follow, just putting some finishing touches on them. I so enjoy doing these as I've said, however this is the first time I've painted them on the smooth velvety surface of hardboard and I think the little critters have found a new home! What a perfect surface for bugs to crawl on, I'm very happy.

That said, I'm sitting by anxiously as my iMac is in the intensive care unit right now and I'm beside myself. Did I back up anything? No. Is everything I need to function on the hard drive? Yes. Am I a putz of the highest order? Absolutely. Good thing my old mac is working so at least I can post this.

I'm hoping our "magic mac dude" Jon can retrieve all of my work, which includes every single photo I've ever taken with my new camera, all of my reference, all of my paintings, my endless folders of inspirational work and so much more. I'm fairly sick about it. Trying to be all zen and cool, it's only stuff, no one's ill, you can rebuild, but it ain't workin worth a damn. All the snaps of the pups from the day they came home up until yesterday morning! I've been sulking all day. We'll see. Hopefully he can save it all. A very difficult lesson learned.

The really gut busting irony is that the external drive that I planned to back everything up on arrived today in the mail. Bite me!

Anyway, whining again. Apologies. I hope everyone has a great weekend and again, thanks so much for stopping by!
Posted by suzanneberry at 1:49 PM 21 comments: