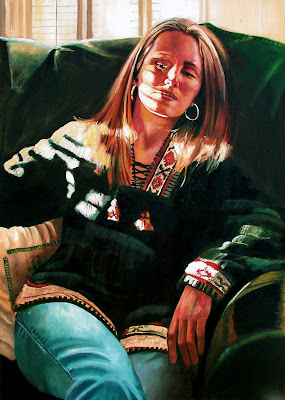 Busy working but feelin the need to post, or re-post in this case, this lovely young lady is Tim's cousin, Jenny. I posted this in my very first shaky weeks of blogging back in '08 but the painting itself was done at least five years before then. I hadn't been working at home at all on art at that time. Exhausted and fried at the end of the day creating campaigns and ads for the newspaper, the last thing I wanted to do when we arrived home was work. I thought I'd seen the last of personal creativity. However, the addition of a new colleague, in our department at work, became the catalyst for reigniting a creative desire I hadn't felt in years.

Young, passionate and gifted, the new employee returned one day from lunch loaded down with canvas stretchers, tubes of paint, brushes and rolls of canvas. I was instantly smitten and I decided I wanted to get to know her better. Our new friendship eventually resulted in the formation of my very first art club. We'd meet once a month, at our respective homes, to present whatever we had worked on.  We were responsible for one creation per month for the year, the rules stipulating a fine of $50 would be levied each time you arrived empty handed. The club consisted of only Tim, myself and our new friend but it was incredibly inspiring and lots of fun. The meetings eventually morphed into what could be called parties and eventually died out altogether, as did our friendship unfortunately, but I credit the time I spent painting for the club to be invaluable as a stepping stone toward the work I do today.

So, thank you Patty.
Posted by suzanneberry at 8:50 AM 16 comments:

LADY IN RED TOO 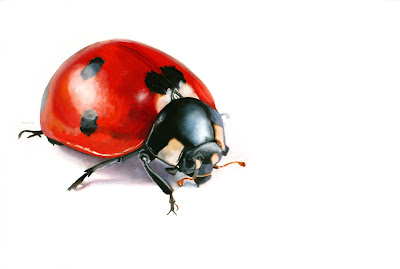 What is it about the lady in red? So not threatening, so sweet, so beautifully dressed. And classy. Not too overstated. The perfect amount of spots and adornment. What can one say? She's hot!
Posted by suzanneberry at 1:00 PM 17 comments: 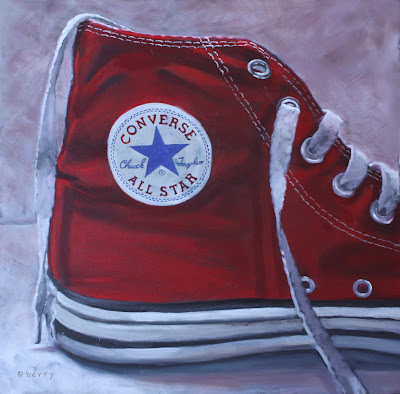 "Why don't you just throw out the shoes and use the boxes?" Poor Pop. Big Wal just couldn't help himself. He'd make that comment every time I got a new pair of shoes and being the dutiful daughter I was, I always laughed heartily for him. (I took the starch out of his imposing parental mystique by calling him Big Wally.) He was tall and sometimes very dark and very angry, however, being his only daughter, I somehow got away with my somewhat casual nickname.

Digressing. Back to the shoes. As an adolescent, each time they bought me shoes, my feet were growing at such an alarming rate, Big Wal surmised the boxes might prove to be a better fit, not to mention providing a much needed rest for his weary wallet. My feet, however, finally did stop growing, at size 10, much to everyone's relief. I thought it was neat. I was 10 and so were my feet, although I was haunted by the possibility of their size matching my age with each approaching birthday. But, happily, I had recently read a article listing the shoe sizes of various and sundry celebrities and I was, I reckoned, in very good company.

Of course, now, as we all know, being a, shall we say, somewhat mature adult, my feet have begun growing again. I have no comment on their present size.

"Paint your chucks!" was Diana's rally cry for this month's challenge. Wonderful subjects! Thank you Ms. Botkin! My only problem was finding mine. It was years ago. I'd just seen Rainman and thought Tom Cruise's squeeze in the movie was adorably sexy in her high top sneakers. I bought them but somehow adorably sexy didn't translate. I looked like a suburban woman in a pair of red sneakers. I was undaunted and happily, I still love me some high tops.

Not wanting to tempt fate and get an early start, I painted my canvas black this past Sunday evening, turned up the heat downstairs and closed it off in the hottest room in the house with  my 20th Century Fox wind machine, cleverly disguised as a fan, keeping the air briskly circulating about the wet surface. And subsequently, when I began painting the next day, I had so little time to complete it before forwarding it on to my challenge mates, I was forced to paint rather quickly. This was a good thing. I began to see the difference between rendering and creating...again. Still haunted by the belief that chops make the artist, I again got a much needed glimpse into the process of the artist I long to be. I plan to make much need visits to that vision as often as I possibly can. And yes, I know, you've heard that all before. Baby steps.

And now, without further prattling, savor these sneakers..... 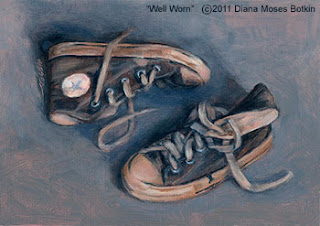 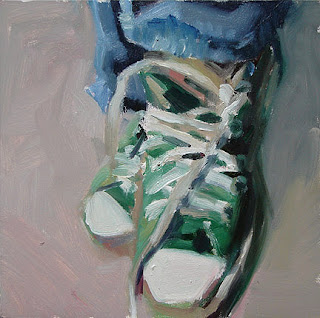 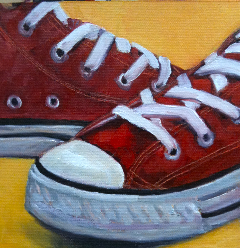 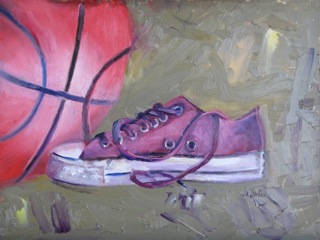 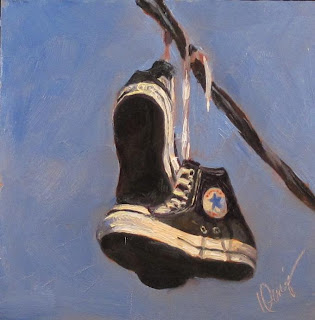 “Just Hanging Out”
oil on hardboard, 6x6”
©2011 Sharman Owings
http://sharmanowingspaintings.blogspot.com/
Posted by suzanneberry at 9:21 AM 17 comments: 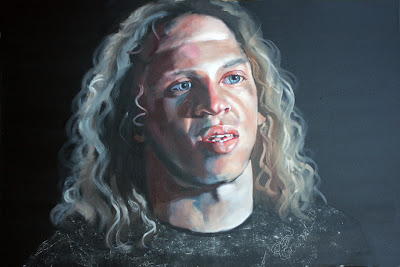 Himself has decreed this painting finished. As usual, I disagree. So, I'm going to post it and then finish it and we'll see. It's not so much that I need to be right....I'll believe that if you will...it's more my never ending trek away from fear and toward that luminous lovely light at the end of that proverbial art tunnel I've longingly labeled spontaneity. What?

I want to think about each stroke of the brush and give it meaning. I find I'm still bringing brush to canvas, hoping what I leave there will work. Staying in the moment is very important. The more I stay in the moment while I work, the easier it will be to do that when I'm not. I'm going to pay attention to every stroke, every temperature change, every value change, and the shape of every shadow and highlight. Where am I rushing to?

I'm looking forward to finishing this.

I remember a long time ago, after trial husband left, deciding it would be an amazing adventure to be married to an artist. I can now say, unequivocally, I was soooo right. Tim's insight and support has been invaluable and it's time for a great big juicy thank you!  Despite all my whining and disagreeing, he's usually right about what I can't seem to see and I am beyond grateful for his input. And his presence. Happy Heart Day dude.
Posted by suzanneberry at 2:48 PM 13 comments: 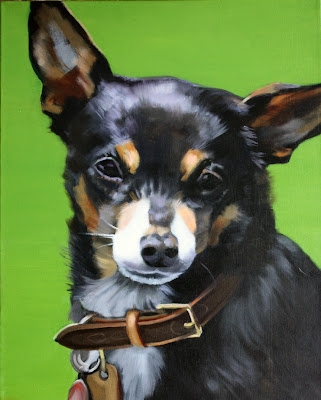 And this is Cooper. Again many thanks to yet another patient owner.

Working on another 24x36" portrait, "male 3" I guess this one will be. Very excited about it, but of course himself as deemed it done and I'm nowhere near where he's coming from. We'll see.
Posted by suzanneberry at 1:57 PM 18 comments: 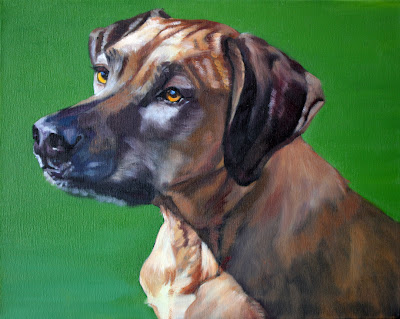 Meet Tobe! And many thanks to a very patient owner.
Posted by suzanneberry at 3:38 PM 16 comments: