IN CELEBRATION OF BRENDA! 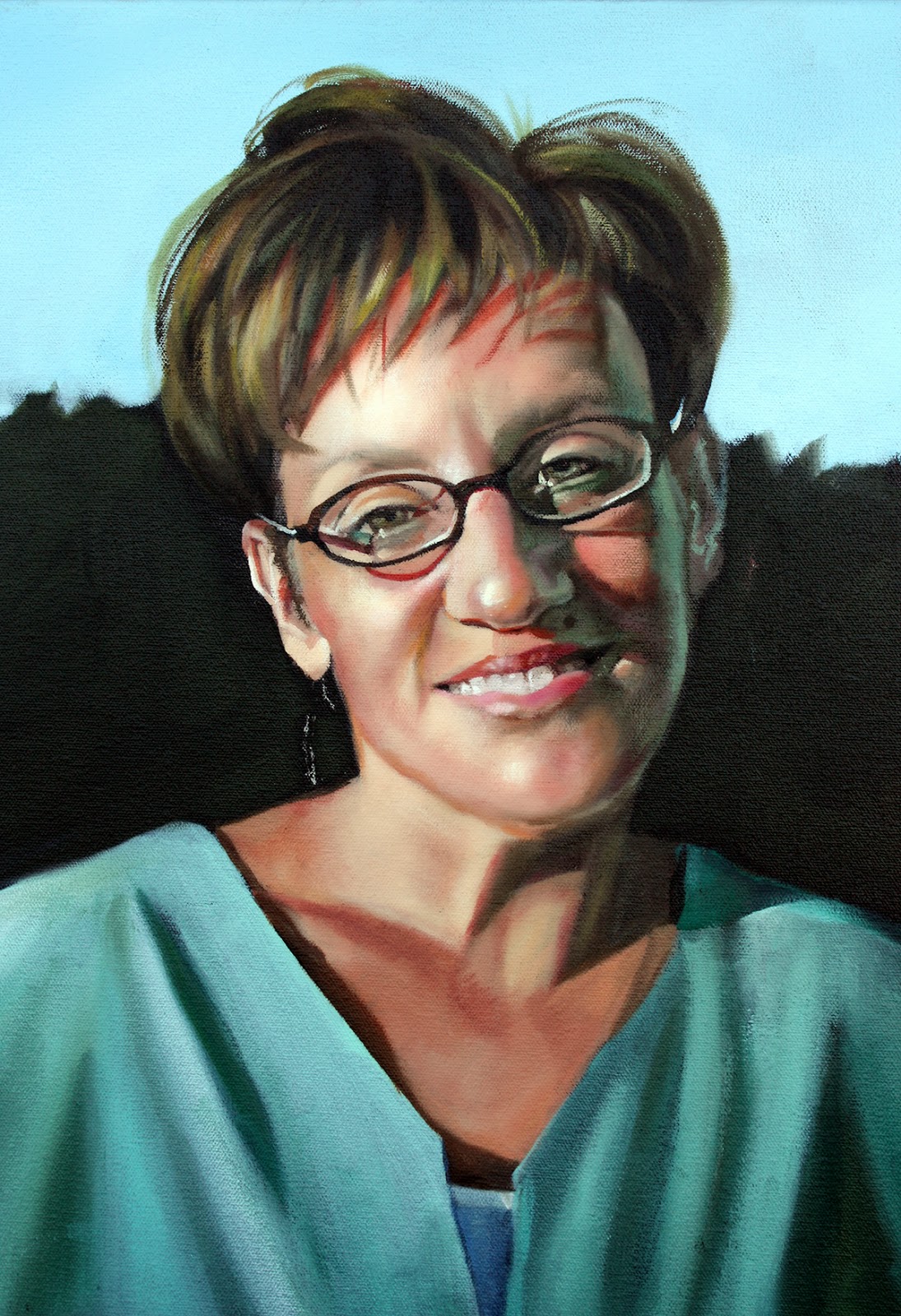 Yesterday morning, the news I had been expecting but dreading arrived. My dear friend and budly, Brenda Ferguson made her transition after a long and difficult battle with cancer. It is so very hard for me to believe that this incredible person, so full of life and light has left this plane.

As I've explained many times here, Brenda reached out to me when I needed it the most and we became fast friends and email buds. We were into the same woo-woo metaphysics and spiritual paths and she would send me passages almost daily to help me through the sudden and unexpected loss of my husband in February 2012.

She was always spot on with what she sent and could lift my spirits in an instant with wise words and spiritual support from her super-sized kind and loving heart. We have never met face to face. She and a friend were going to come down to New York for a visit from her home in Maine last summer but unfortunately she had become to ill to make the trip.

The painting above is a detail shot of the second portrait I began of Brenda last year. I had finished the first one, created from a pixelated low-resolution reference which now, I'm incredibly happy to report, hangs in Bren's home. But later she had told me that there was a much beloved twinkle in one of her eyes that didn't appear in the low resolution snap, so she sent me a clearer, higher resolution version so that I could add it.

I was so struck by the difference in the two reference shots that I immediately began a new portrait, hoping to improve vastly on my first attempt. However, I became so engrossed in her features, wanting to get them just right...I don't think I did, but I will...that her face, head and hair just grew all out of proportion and I got stuck.

Wanting to finish it as soon as I could, I kept at it but just couldn't get to the place I'd envisioned and stopped. Now however, I think I'll begin yet another portrait, using the same reference but from a different place in my heart and I know, as we had discussed, that she will see it finished. 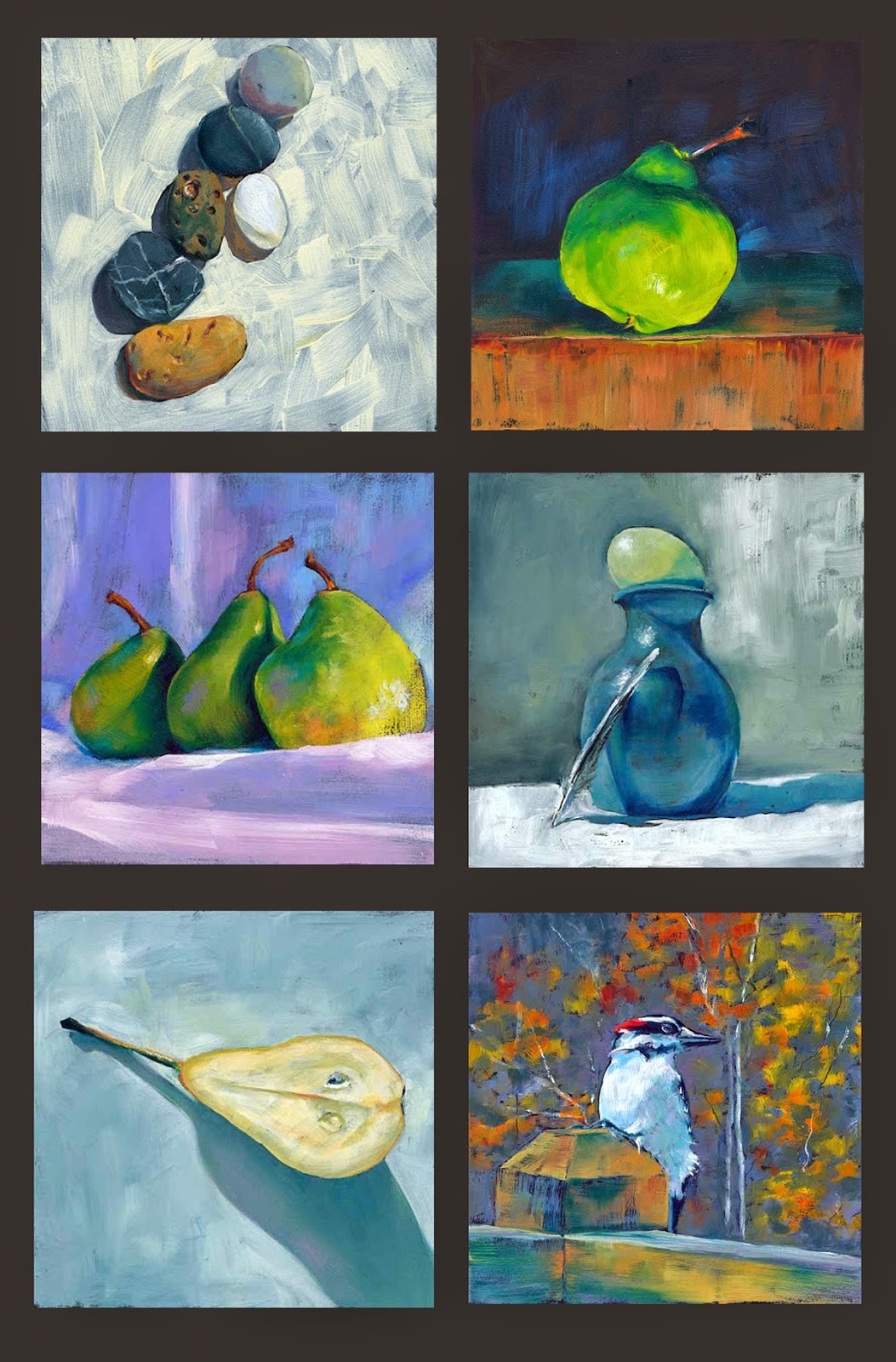 I first saw Bren's work on the Daily Painter's site and was immediately attracted to her bold use of color and freedom of brushstroke. Her paintings of pears are my favorite however I am the proud owner of a lovely collection of Ferguson originals, a few of which appear to the left, that I will treasure for the rest of my days.

Brenda's works and style are the perfect vehicle for daily painting. Each time she posted I was so drawn to her ability to catch a moment, a feeling with everyday objects, giving them so much character and life I felt they moved about on the surface of the board.  I envied her spontaneous and lively brushstrokes and coveted her courage to splash in hues with such intensity that made every composition sing with life.

The painting below is my very favorite though. The expression on this gull's mug is priceless. Such attitude and presence, as if he's quietly studying something off in the distance, not sure whether or not to investigate and looking at bit put out by what he sees. I studied her treatment of his breast and body for quite some time when it arrived in the post. I love the palette, the composition, everything...it's just perfection! 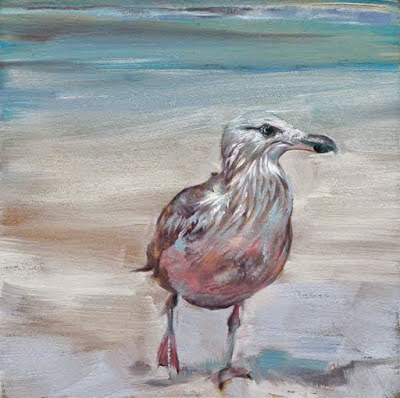 And I think the title is so fitting. It's so what I envision Bren saying just before she left, with a smile and that twinkle in her eye...well guys...
"I'm Off!"

I would like to extend my deepest sympathies to the Ferguson family and say with all my heart how sorry I am for your loss. I know her spirit will be with you always.


I love you my dear budly. Thank you so much for being my friend. I cannot wait to finally meet face to face. 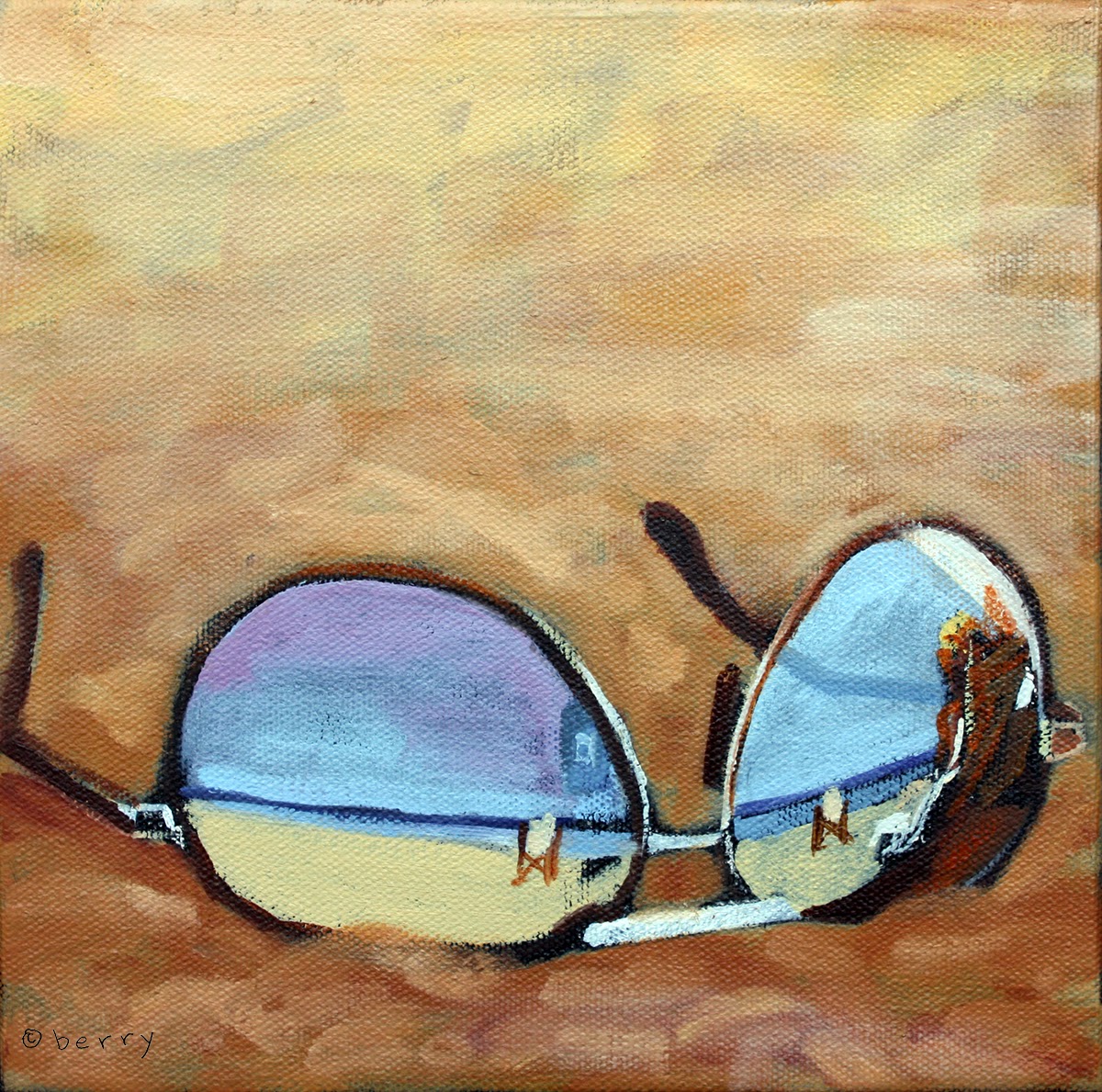 Muddy. Sloppy. Unfinished. And that's just fine. I'm still stuck in the doldrums and that's fine as well. I'm really not sweatin' this new, seemingly entrenched aversion to painting...this too shall pass.

What you're looking at is truly the work of an artist exposed. Naked. In an effort to help me simplify, Sandra suggested I finish my next painting in one day. I agreed, however I found I was far too uncomfortable to remain in the studio more than an hour at a time, so the painting above was "completed," and I use the word loosely, in two hours over two days which took literally five days!

And this could just be an extended version of the dreads, who knows? Whatever. I'll keep trying. I just hit me that I've never woken up on a Monday morning with the fitness resolve of a supermodel, so not surprisingly, deciding I'd complete a painting a week hasn't stuck either. And that's fine.

I'll get there. Thanks for your patience and for dropping by. 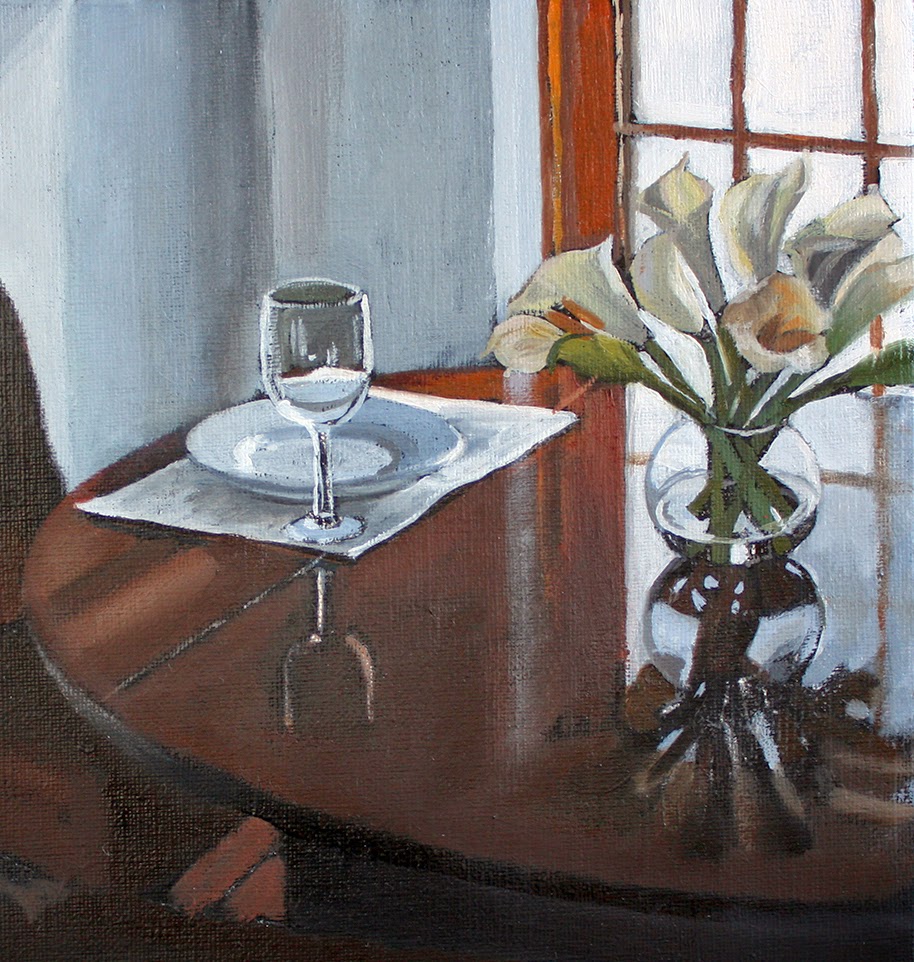 This is my second offering for The Naked Artists blog I share with friend and fellow artist Sandra Busby. It's a detail shot because I didn't finish in time. No whining allowed is the rule for the blog Sandra and I came up with to further our growth as creatives, however I can whine all I want here.

I don't know what it is, I just don't want to paint. Each day I go into the studio hoping that little spark will ignite my desire to work but...nuthin. I'm fine with it. There's nothing I have to do or prove to myself or anyone. Whatever the reason for this version of the "dreads" I'm just going to power through. 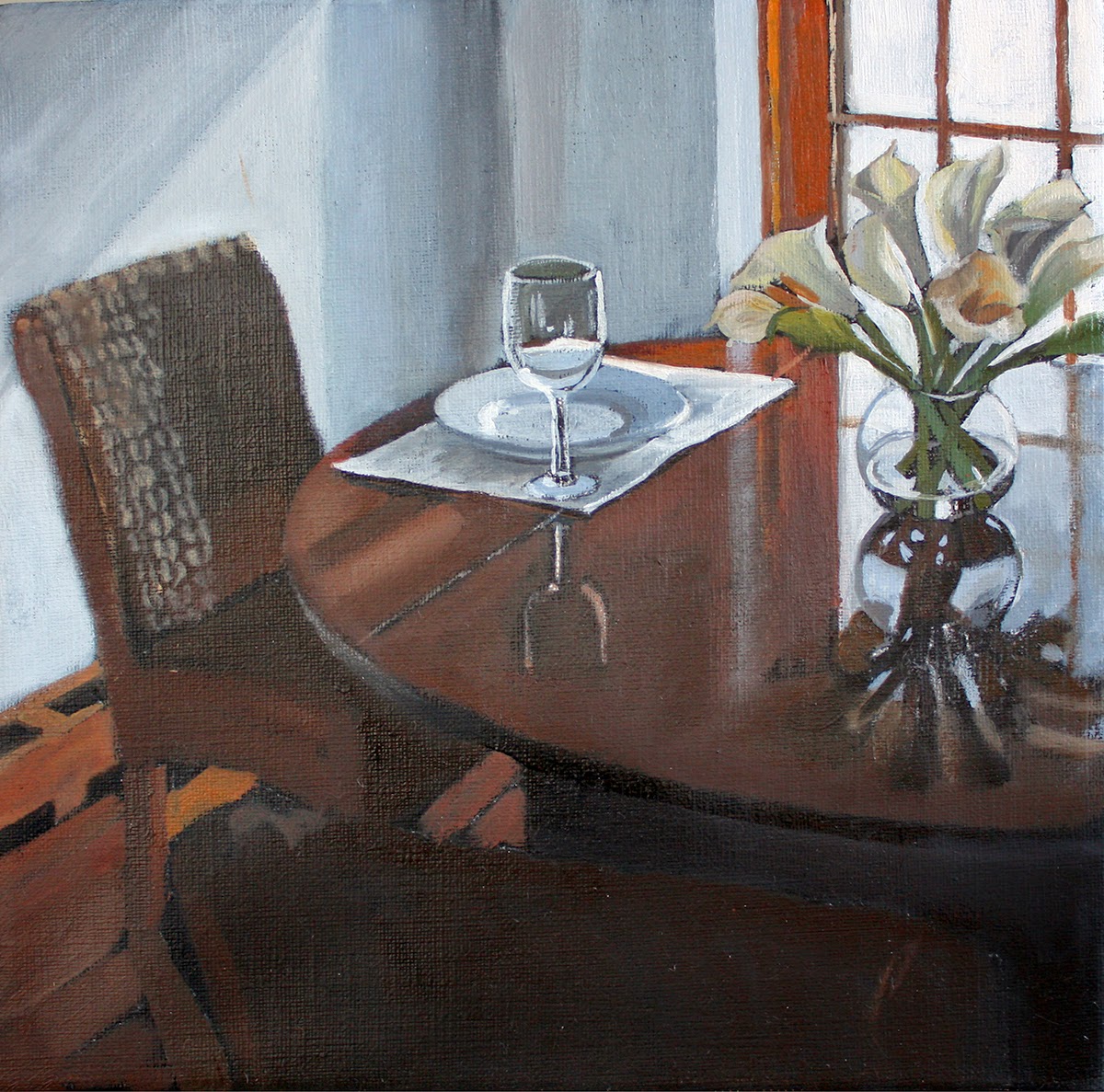 This is what the 8x8" canvas looks like now. The chairs in the dining room are lovely to sit on but a pain in the patootie to paint. They're made of woven straw I think. I decided it's fine not to finish and to reveal what's not done. That's the point right, warts and all!
Choosing less complicated compositions might help!

At least I'm working.Thank you so much for dropping by.
Posted by suzanneberry at 5:47 AM 16 comments: