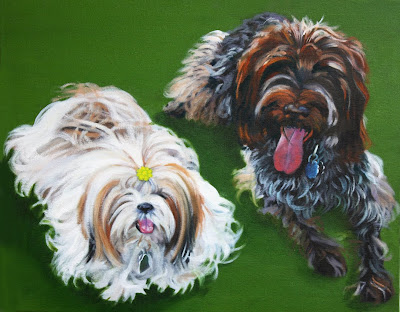 This is another donation painting that I've been working on. It's almost done. It's funny, but when I donated certificates to animal rescue organizations in the recent past, I received only one or two certificates back in return for portraits. Happily, I've gotten at least eight back within the last year and a half. Unhappily, my schedule has been haphazard at best, as I'm sure you'll remember from my near constant whining about the pups. But, again happily, I'm catching up.

Raz is just about healed, we're just waiting for that last x-ray.  As far as he's concerned however, he's 100%. Good thing too. His brother just discovered what other purpose his little hangie down parts might serve and is very fond of trying to mount him. Not good for hip replacement patients. 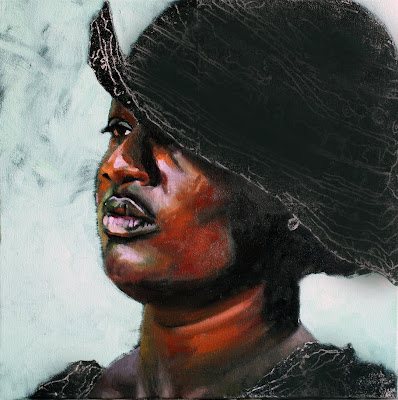 First of all I'd like to thank everyone who left a comment on Easter Sunday! Your words were indeed lovely and I'll treasure them always. I was so jacked from working on a portrait that I had to jump right into this piece. I really enjoy doing the dog portraits and have quite a backlog of donations lined up, but if I'm not careful, it can lapse into an assembly line. The challenge this month was right on time. And it led me to this.

This is Ciree from Survivor: Heroes vs Villains. There are some incredibly beautiful scenes on that show, so much so that we actually hit pause and take shots of some for future inspiration. Not sure of the legalities. Anyway, this was a shot of Ciree standing with her tribe right before a challenge. She looked downright regal, not to mention the gorgeous colors the sun was revealing on her incredible face. Working on Easter Sunday got me in touch with the rich tones inherent in dark skin and I was inspired to try more. Then I remembered the snap I took of Ciree.

Himself suggested an "in progress" series on this painting. He's not fooling me one bit. He's afraid I'll overwork and wants the early steps recorded for safe keeping. Brat!

I've been working with the wise words of Jeff Hein echoing in my head. There's nothing as fresh as the first strokes, leave them alone. Make them mean something the first time, don't scratch around and try to find the right one. I watch him confidently start with a blank canvas and feel his way around the models face with his brush, full with rich, creamy oil, just the right temperature, just the right value. Hold the brush at the tip, it frees up your strokes and your approach. Enjoy your work.

Imagine if I listened to that voice most of the time instead of the other one in my head?
Posted by suzanneberry at 4:36 PM 24 comments:

WE'RE LOOKING FOR THE NEXT DAILY PAINTER!

Becoming a member of DailyPainters.com literally changed the direction of my art career. It's an incredible creative tool and an inspirational and selling environment. I'm thrilled to be a member.

You could win acceptance into our gallery, including one year of free membership, plus a $500 gift certificate to Blick Art Materials. Just click here for more information and good luck! 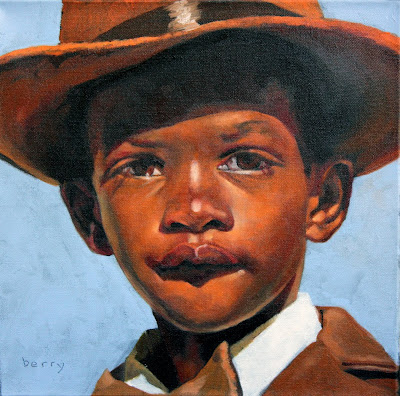 
First, let me just say..."time flies," whether one is having fun or not. This is in no way to suggest that I am not having fun, quite the contrary in fact. It just struck me that time passes, it seems to me, just as quickly either way. Digressing! "Spring!" is this month's challenge theme, given to us by Jeanne Illenye, the group's newest member and an incredible artist.

Spring, for me, always arrives dressed in a pair of brand new, super high-glossed, patent-leather Mary Janes, worn with the ever-tasteful and appropriate white anklet—little blue flowers adorning the scalloped edges, some kind of pastel colored frilly frock with lots of crinolines sticking out from underneath and banana curls, the result of sitting uncomfortably atop a stack of phone books in the beauty parlor for what seemed like days. The coveted coils, sadly, will later disappear at the slightest hint of moisture in the air.

For some reason Spring has been frozen in time for me. I'm between the ages of 5 and 10 and I'm all dressed up for Easter Sunday.  I loved Easter Sunday as a child. It meant a very special dinner, cooked by my Mom, who was arguably, one of the best to ever darken the doors of a kitchen. We would come downstairs—that morning—to colorfully decorated baskets full of goodies and sweets along with a very loving letter written by our parents. It was all perfect, except that is, for the Easter Sunday church service. I dreaded it more than a trip to the dentist.

Each year, during the Easter service, us “little folk” were called upon to favor the congregation with a selection of some sort. This meant that those of us without so-so singing voices and/or budding musical instrument skills were relegated to standing in front of everyone to recite some inane little Easter/Spring poem. And as usual, the church, to my great horror, will be stuffed to capacity.

Fast forward. It's nearing my turn. The girl, whose thick long braids I coveted with every cell in my body, was nearing the end of her poem. I'm next! Dry mouth, hands shaking, knobby knees—buffed to a blinding shine with baby oil for the occasion—I made the long, lonely, terrifying walk past the choir, the pastor and all his attendants to my spot just to the left of the pulpit.

Swallowing nothing and refusing to look up, I clasped my hands together, tried to clear my throat, opened my mouth and croaked..

What are you lookin at me for?
I didn't come to stay.
I just came to wish you
A Happy Easter Day!

Pinch either side of the dress with thumb and forefinger, slip left foot behind right, bow your head and curtsy. It was over in a heartbeat, which I'm sure everyone could hear.  Four weeks of dread, fear, nervous gas and the hiccups for four sentences.

Why does my painting not reflect my rather detailed description of my own personal Easter Sunday? I have no idea where those snapshots are but I found this incredibly dapper young man in my friend's photo album last year and pinched it!

Spring, as interpreted by the group, is delightful. Enjoy! 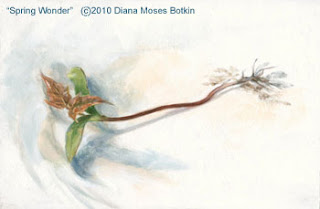 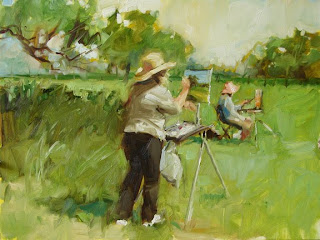 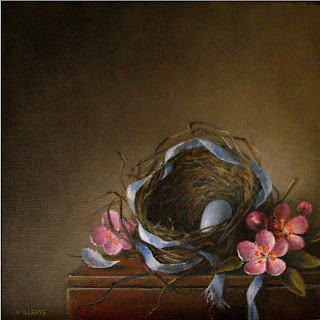 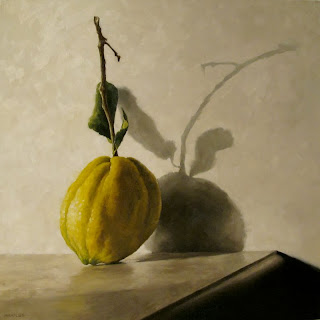 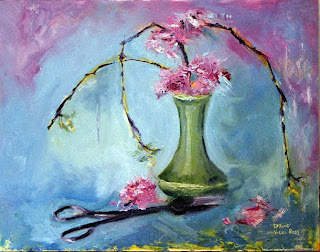 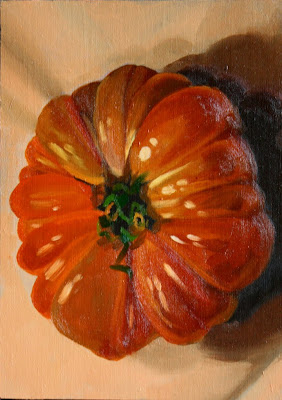 A daily painting! Hot damn. Angst-ridden, consumed with doubt, the old voice in fine form I watched the Jeff Hein DVD whilst working and pushed on. Not a great photo, but it'll do. See what happens when you don't work on a daily basis, or a daily painting in this case. Atrophy of the art fingers and expiration of one's artistic license.

It's so funny, working on the dogs I put myself through the usual nonsense but it's not at all like working on a daily. Seems I need to amp up the output.

This is not whining. I swear. 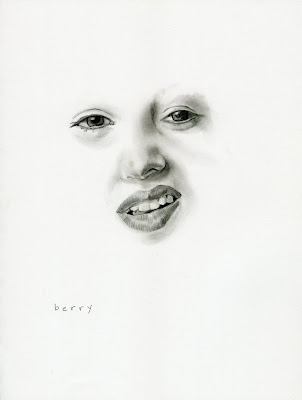 
I'll be honest. Carol Nelson, a gifted artist on DailyPainters.com, is painting 100 faces in 100 days. Her blog followers, under no obligation to buy, were asked to send in their photos to be painted by Carol for her 100-Day challenge. Visit her blog at http://carolnelsonfineart.blogspot.com/, and check out what's she's been doing, I think her paintings are spectacular! Needless to say, I was green with envy. What an incredible idea!

I emailed her to tell her how much I was enjoying her work and to impart my desire to covet her idea. Being a nice person and very generous, she suggested I try the same thing with my floating faces. I think I will.

I'm a little hesitant though. It's like giving a party and wondering if anyone will come, but, I need to break out of this little shell of fear I've been constructing since the little furry Berrys arrived.

So, here I am, announcing the "Floating Faces Challenge." If you'd like your features, or those features of someone you love and or know, floating on a page just email me your snaps. For the purposes of these drawings, full frontal is best. I find three quarter views and profiles don't float all that well. You are under no obligation to purchase the drawing but I'll need permission to display your countenance on my blog. Just mention that you agree to let me draw and publish your likeness in your email.

My email address is: suzanne@suzanneberry.com. If you'd like to send snail mail just e me and I'll shoot over my physical address.

Well there it is. I've sent out the invites, now let's see if someone shows. And thank you in advance for considering attending the party even if you don't.
Posted by suzanneberry at 4:19 PM 8 comments: 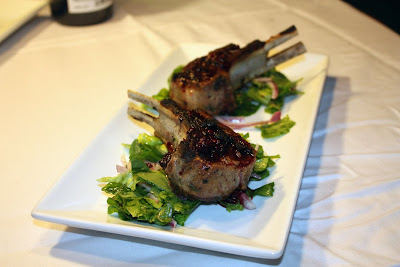 Himself fancies himself to be a rather accomplished cook, and I quite agree with him. In fact, I'm thinking of gifting him one of those jaunty chef hats, some orange clogs— a la Mario Batali, and a chef jacket with "Berry" written in funky script on the pocket.

The bulk of Tim's creative focus, for the last few years at least, has been in the direction of the culinary arts and I have been the very happy, but somewhat plump, recipient of his endeavors.

Two weeks ago, we attended a charity event at a local bistro. The place is called "Kitchen: a bistro" in fact, and it was voted the Number 1 restaurant on Long Island by Zagat in 2009.  The event was a wine pairing, with wines from Jamesport Vineyard, also on Long Island, paired with a five course meal of Kitchen's phenomenal fare.

We were in heaven that afternoon. Quite simply in heaven. We hadn't been out in quite a while, the food was a revelation and the wine was flowing— non-stop. I haven't been in that condition in quite some time. When we arrived home, not only did I pick up and carry the wrong Pug to go potty—Raz did in fact run downstairs while Blu was happily tucked under my arm—but in the backyard his leash leapt out of my hand and in an effort to catch him, I fell and sprained my foot. Tim noted—somewhat snidely and in much more colorful language—that I might consider losing the Frankenstein flip-flops as I spend quite a lot of time falling on my arse. Food for thought.

Anyway, the following weekend we decided to shop the Whole Foods Supermarket that had just opened in our area. It was there that himself decided to create his very own multiple course feast for us—in our kitchen—that very day! The meal was a work of art! I sous-chefed and and set the table while the artist created his masterpiece.

The meal, in my opinion, was as tasty and inventive as any dish we enjoyed the weekend before and I thought it might be nice to share. My sincere apologies, in advance, to any vegetarians who might be reading this, in fact you might want to skip this part. I am in fact a carnivore. I'm not proud of this but also just not ashamed enough to swear off...quite yet.