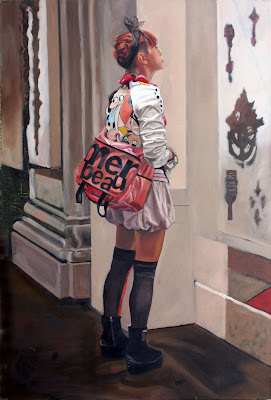 It's been a while since I posted this in progress and then put it away. This past week, each time I passed it in the storeroom, I felt excitement at the prospect of working on it. I usually need a building to fall on my head, but I took this as a sign and guess what I did? I worked on it. And, oddly enough, this is the first painting that I have felt really intimately involved with.

I know that sounds rather silly, but usually I'm trying to match color values and temperatures or get a likeness. And I am, but I'm also self editing the reference to create a more interesting composition. And as I progress, it's obvious that the real exhibit is the visitor and that amazing outfit she's wearing. Whatever is on the walls pales in comparison to the figure watching it.

And so, I'm left pondering a name for this painting that says just that. I don't have too much left to complete and I must say that the background isn't nearly as exciting to do as the figure, but I'm going to keep working on it until it excites me as much as the figure does. We'll see.
Posted by suzanneberry at 3:21 PM