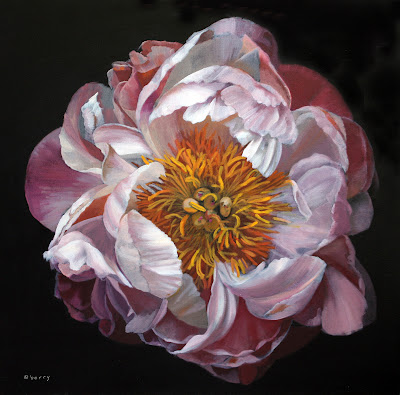 I've never painted a flower. Leaves yes, but not a flower. I've always wanted to, but just couldn't seem to snap the right photo of one. There are hundreds in my file, you'd think I'd find one that hit the sweet spot. But no. Heavy sigh. So it was off to a stock site to make a purchase. Glad I gave in, it was fun.

This really isn't finished, it's one of those paintings that could go on forever, but I decided to call it because, not to break form, I'm way behind.

I've found that pre-mixing my palette really helps my flow, as I've mentioned. I would always run out of what I needed and now I don't! Plus, I realized that taking the paint out of the plastic container and putting it onto the palette paper was a wasted step, so now it's out of the freezer and onto the tray, still nestled in their little plastic homes. I loved this selection of colors, it looks like sherbert.

I also discovered that I have been growing as an artist! Who knew? Back in the day, I would have painted each one of those curly french fries in the center, one by one—shadow, mid tone and highlight! Instead, I found the darkest shade and splashed that in and then when that was dry I picked out the shapes with lighter shades. I've included the scale shot even though this canvas is much smaller than the ones that I've been working on of late, but still rather large for a single bloom. I'm really hooked on Blick's Heavyweight pre-stretched. They just feel so substantial and the paint just seems to glide on.

Also, I found some great brushes there as well. I've written before about trying to extend the life of my brushes but basically, if you use them, they deteriorate. These new Princeton Catalyst Polytip Brushes seem to be just what I've been looking for. They feel wonderful on the canvas and clean up doesn't seem to be disturbing their 'do! Nice. We'll see.

I cannot believe that summer is almost over! My second summer without Tim physically here was strange. Last year, I guess I was still in shock, plus there was construction going on most of the time. The confusion and distractions helped. This summer however, it was left to me to keep myself busy and out of the pity pot.

I failed these last few weeks but that's cool. The good news is that I feel him here all the time and have embraced the reality of his presence more often than not. Sometimes though, it's back to the "real" world and the emptiness and silence. But it doesn't last long. I realize there is nothing to be sad about. He's much happier, in fact he's perfect and he's here! Where's the problem? Yeah, I know it needs work. But, it's a choice. Reach for the good feelings, the bad ones don't serve any purpose that I can see. 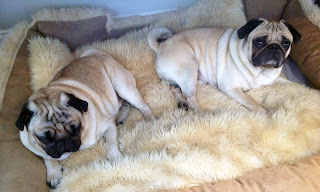 After I snapped the scale shot I turned to look for something on the table and there, underneath was my cheering section and support system. Raz and Blu Berry! Pure perfection.

Sometimes they seem to be interacting with someone that I cannot see. Gee... I wonder who that could be?

Thank you for stopping by, your support and comments continue to help me grow.

Posted by suzanneberry at 12:30 PM