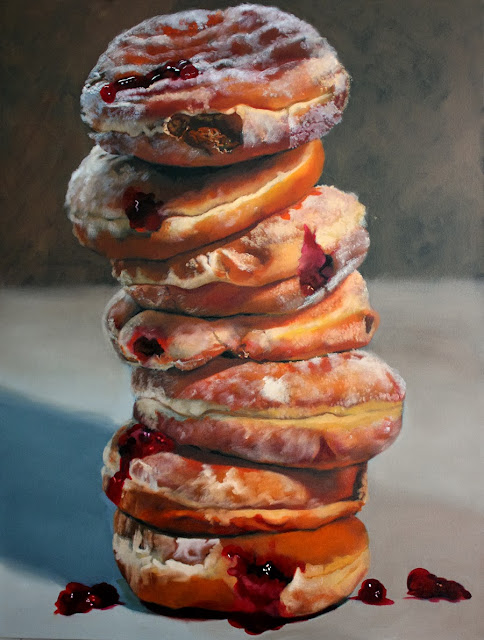 
Well, what can I say. If ya can't eat 'em, paint 'em. Curious though that as soon as I swore off the demon white granules I felt a desperate need to paint pastry! Hmmmm. Nothin' gets by me, there's a connection there! (gee, ya think suz?). There are plastic containers of the prettiest cupcakes in the fridge and there were 2 dozen assorted doughnuts that sat around for a while. How surprised was I when the late night munchies descended and I chose an apple from the inner glow of the open fridge! Growth spurt!

This was so much fun to paint! Each day I couldn't wait to get to the studio. Even with appointments, prior commitments and emergency phone calls from friends in need, I found time to get in there and work on this. Could it be the subject matter? Na...I think I was just really havin' a good time.

I've included some progress shots because when I began I was determined to have a finished painting that looked more painterly and I think I was doing okay in the beginning but eventually I got tighter and tighter. Still, I'm happy with the results. Might as well embrace my style.

I bought these from Dunkin Donuts and was a little disappointed in the amount of jelly inside. I imagined all sorts of oozing globs of the stuff emerging from these golden disks of love, (easy suz, you're worshiping the food again...not cool) however when I began to set them up I found I had to squeeze some of them beyond all recognition to get even a little blob out! Bummer!

They look precarious because they are. I put a hand lotion bottle behind the stack of sugar-laden love to hold them up and snapped away. I still have lots of work to do but I need to get on to other things and I wanted to post my progression so far.

The sugar was interesting to paint. At one point I actually dotted the canvas with the brush and then took an old brush with a nasty do and shmushed away. What I found interesting was that the warm and cool sections of the sugar globs really illustrated depth. In the light I used yellow ochre, a bit of raw umber and white. In the shadow it was a combination of raw umber, white and a new tube I just bought of blue white. Whenever I drifted into warm territory with the cool version of the sugar, the painting didn't read so it was a good lesson in temperature values.

I'm going to finish this and the Sparrow's Ass (Berry-speak for asparagus) before the end of January. There are more than a few paintings just languishing, including that portrait that I just can't seem to nail, but I will. I think. 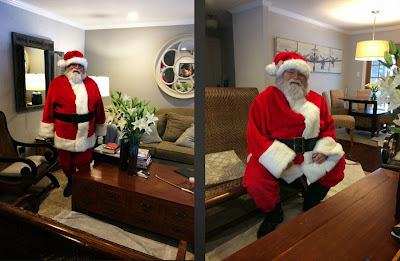 Also, I had a visitor today! I glanced out the window early this morning to see a red suited figure headed toward my door! What a surprise! Not one to name drop, I will say that Santa and I are tight. He was in the area checking on some routes since the neighborhood has expanded since last Christmas and he stopped in for a cup of Joe and to use the facilities. We had a nice chat. The boys weren't with him though, curiously enough he was in one of those little numbers, you know the ones...they look like toys. Fitting transportation I thought.

Anyway, I'll be posting before Christmas so I'll save my good wishes for then. Take good care and thank you so much for stopping my.

Oh, yeah, one more thing. Tim suggested I remain upbeat and joyous and I think he's right. I am celebrating his Spirit this season and enjoying every minute.
Posted by suzanneberry at 2:13 PM