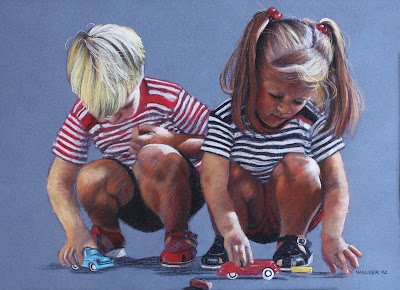 I found this in the art closet along with some other oldies that I threatened to post when I found that scratch board from back in the day. My name was Walker back then (you remember trial husband) and the date says '92, however I thought it was much earlier than that. Tim and I were transferred into the same art department that year but it was toward the end of the year that we started seeing one another. So I guess it's correct.

I worked in pastels exclusively then. And while I really enjoyed working with them, I longed to make the transition to oil which wouldn't happen for another 12 years.  My friend decided to manage my "career" and put me in a booth at a fair in the Planting Fields located in a very beautiful section of the North Shore of Long Island. I did this painting for that. It was my first public outing. The hands are a little hinky but I remember feeling they turned out well. I've progressed I guess because I'm not at all happy with that claw the little boy is using to maneuver his little blue truck about.

I had a decent amount of traffic for that weekend, but nothing sold. Easily discouraged I packed it in and didn't work again until Tim and I fell in love and began trying to impress each other with our respective skills later that year. He'd never used the medium before and his first portrait was very impressive.

That was the beginning of our..."oh yeah! well check this out" period, which was great fun. Its so funny how time changes everything. Back then the television was never turned on, we were drawing and painting all the time. Towards the end, worn down by work and the usual life challenges, the telly was on constantly and the last thing he felt like doing after a day of creating rush campaigns and the like at work was to come home and paint.

It's been a strange week. I'm still working every day but I'm discovering that grief, for me at this stage, is not unlike a migraine. You're going along and then one day you wake up in excruciating pain, unable to function and the next day it's gone. I had a two day grief migraine this week. Must be a reaction to getting back to work, like on some level I felt guilty for enjoying myself I guess. There should be a little grief handbook that tells you what to expect. Like... "at the fourteen month mark you will suffer from intermittent periods of feeling like it just happened". I mean before that I honestly felt, you know this really sucks like nothing has ever sucked before but I think I can do this. And I know I still can because Tim is always here to help me.

The new space is really helping my desire to create. I'm very fortunate to be able to have this light filled, inviting space to work in. Given my druthers I'd work in a closet lit with one lone candle if I could have my best friend back but since I can't, I'm going to continue to be positive and grateful and work through the setbacks and keep going. I have no choice.

I know he would insist on that.


Posted by suzanneberry at 1:12 PM