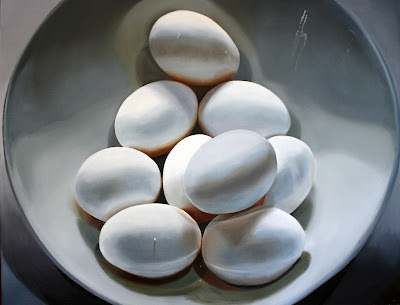 
Yet another protein-packed canvas! Thought I'd be painting eggs for a stretch but I'm done for a bit after this I think. Too much protein isn't good for me!

My challenge choice turn came round and I chose an all white composition as this month's subject. This set up, believe it or not, is of 9 white eggs in a white bowl on a white background, but as you can see there was very little in the way of white to paint...which is after all, what attracted me to an all white challenge! The lessons in value and temperature are many.

I took this reference shot when I did my extensive egg photo shoot with the double yolks. When I suggested the all white challenge I'm sure I had this in mind. Taken from above, I loved the shot; it was graphic and had an element of abstract design that I thought would be so much fun to paint! It wasn't though, surprisingly enough. It did become a tad tedious. It's not completed, but I need a break and will put it away for another day. I think it's close enough to call though.

I had a hell of a time with the bowl and the eggs. I wanted smoother transitions from shadow to light but it just became splotchy. I feel a little betrayed by my larger Home Depot brushes. But, who cares? I worked, I was present, focused and involved. That is what's most important. And even if I'm disappointed in the outcome, handling that with emotional maturity is another part of the lesson. I don't know how many paintings I've abandoned only to find them years later and wonder what my problem was. I think, with this one though, I missed the color! 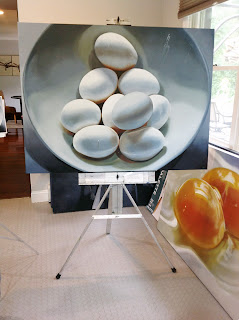 Here's the scale shot, juxtaposed fittingly next to their cracked cousins. Again, thanks to Bren for the scale suggestion!

Quite surprisingly, there were, evident in the reference shot, shades of burnt sienna! Where, I wondered, could this color be coming from? Then I realized that it only showed up on the bottom of the eggs. They're snuggled up in one of those 21st Century bowls that are attractive but fairly useless. You know the ones I mean. The huge, oddly-shaped dishware that holds very little in the way of food but look really amazing with a handful of micro greens and one big shrimp!

This is one of those bowls. The front end is about two inches in depth and the top end is about eight, so the eggs settled toward the front end and gravity affected the yolks, the double yolks I should say, which made themselves known through the thin shell with that touch of burnt sienna.  I guess. I can't imagine how white eggs in a white bowl would suddenly sprout a warm glow of sienna through their shells otherwise.

I hope the summer is going well for you all. And I wouldn't dream of closing this post without uttering just two more words...Tim Berry. Whew! There, thanks, I feel much much betta!

Oh, yeah, I almost forgot...if you have any interest in joining our happy group, please email Diana at diana@dianamosesbotkin.com.

Please enjoy these wonderful all-white compositions from the group: 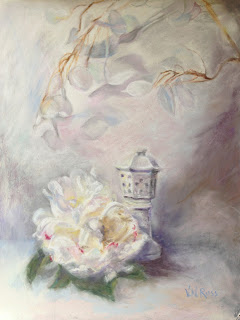 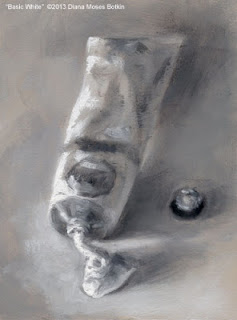 Posted by suzanneberry at 10:33 AM