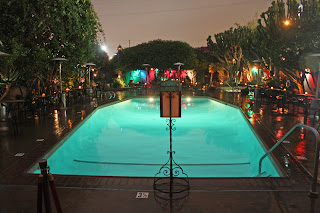 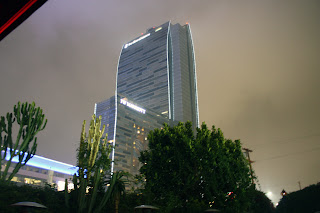 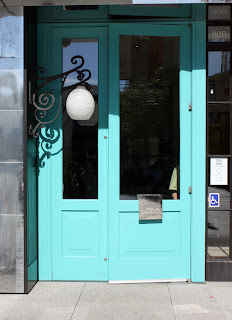 The pool and patio at our hotel known as The Fig on top. In the middle an imposing modern building rising up from the charming cacti growing around poolside. The door to Wolfgang Puck's restaurant downtown.NFDP

I'm back! I joined my husband in Los Angeles for the Adobe Max seminar this past week. We left on Sunday and arrived back home on Thursday. It was very, very interesting. A lot of the classes featured programs I have only recently begun learning so seeing their capabilities first hand was invaluable. But there were three we participated in that really made the flight across the country worth it. Eliminating the background of a photograph in Photoshop is quick, easy and painless and the ability to do so existed in the very early versions, if not the original. Who knew?

Anyway, Tim was asked to attend the seminar this year and was happy to do so, however when he asked me to go with him, I hesitated. Traveling isn't one of my favorite things, especially in a very large metallic object lumbering across the sky. But, I've been working from home for the last five years and I needed to know I could indeed travel, so I agreed to go with him. And it turned out to be a great time. The flights both to and from were delightful if not a little cramped, our hotel wasn't at all what we expected but we adapted and downtown  itself was very cool. Sort of like the hustle and bustle of Manhattan, in a much smaller area, but without the frenzied rushing around vibe and a lot tidier— in spots. And on the creative side, it was invigorating to see what the latest technology can offer and experience it all with my favorite human.

I almost got us into trouble going through security though. I'd emptied all my stuff into the tray to walk through when I remembered I'd left my little pot of lip gloss in my chest pocket. Not thinking, I called to Tim, who had just gotten cleared and I...wait for it....it's worse than you think...tossed the lip gloss to him so that I could then walk through the detector! A very large and burly security guard wrinkled his fleshy forehead and declared—in what I swear was the same vocal cadence Tom Hanks used in A League of Their Own when he told the women there was no crying in baseball— "you can't throw that over to him!" A little excitement ensued and Tim was made to walk through the detector again while I was treated to a thorough patting down by two very large, mint-green gloved hands.

You can imagine the comments I had to endure halfway across the continent. Anyway, on top of a lot of electronic freebies, the Adobe folks gave each attendee, and there were a lot of us, a free Droid 2 and Google TV! I'm so glad I got to share this with himself and that he asked me to accompany him. Thanks dude!
Posted by suzanneberry at 2:43 PM