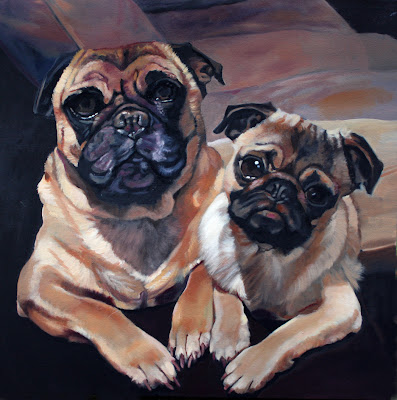 This is Samson and Delilah. I painted this as a gift for our friend Val who puppy sat for Blu and Raz while we went bi-coastal. Delilah, the cutie on the right, is Raz's sister and Blu's half sister...same dad, different moms. We picked them up from the breeder at the same time.

Despite my constant whining when they were pups, I really do think of my babies as just that, my babies. I'd also like to think of myself as the kind of person who hasn't substituted pets for children, but admittedly, I have been perusing catalogs for winter coats and sweaters for the little tykes. Anyway, leaving them with Val gave us both complete peace of mind while we were away, until our second day in when I became uncomfortable with my pervasive calmness in LA and decided we couldn't reach Val by phone or computer because Blu had somehow gotten out of the yard and she was out searching for him. Tim very lovingly talked me off the ledge and I quieted down until Val returned our call to report that everything was, of course, fine. Guess I was having too much fun and had to run to the familiar shelter of terrorizing myself with my thoughts...a favorite pastime of mine.

Anyway, this is just about finished. I like my work better in real life, the photos seem to be too hot. Tim suggested I change some settings on the camera that would allow the transition of colors to appear softer. We'll see.

Enjoy the weekend and thanks so much for stopping by.
Posted by suzanneberry at 12:59 PM