I'VE BEEN PUGGED! or The Pug Mystique from Behind These Eyes 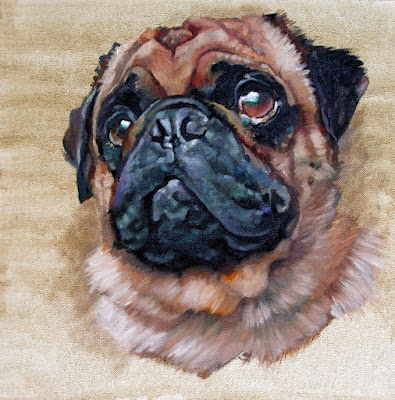 Yeah, I know, it seems I just can't stop posting this painting. I confess. It's among what I consider to be, one of my more successful pieces. Did you buy that? Me neither. What I really mean is that I like it! I really, really like it! (this line is an homage to Sally Field's acceptance speech at the Oscars back in the day for those of you too young to know, not any arrogance on my part. Heaven forbid I should be viewed as confident and proud of what I do....thanks mom).

Anyway, I digress...big time. Pugs! Where do I begin? I used to chat online with a Pug parent about four years ago. She was a very nice person, pleasant enough, fun to chat with except this "Pug" thing she had seemed a tad "one toke over the line" for me. And over the years since, I've had occasion to see other Pug people in action, and thought much the same thing. I mean, really, I thought they were....well...you know...fuggly quite frankly, (fuggly, i'm told, means ugly so much, cute becomes the perception).

So, fast forward to the present. Recalling, for those of you who missed it, the demise of our beloved pup, Devlin the WonderDog and our subsequent purchase of not one, but two Pug puppies last year.

If you had occasion to review some past posts, around this time a year ago, you would see that I felt quite put upon, cranky and downright pissy about taking care of these two little pups while I tried to get some work done. Ok, yes, when I first saw Blu's face at the breeders, I was stunned. He was gorgeous!! I now call him my supermodel. But Raz had that traditional "puggy" face, that, at the time, I thought quite fuggly. I have since come to regard that particular pug puss as anything but. This change in perception, I believe, is part and parcel of the "Pugged!" process.

We were strangers, we didn't know each other. I was just this "thing" that seemed to have replaced their mom and they were adorable, yet devilish and troublesome, little puppies. I thought they were cute but all I could think of at the time was how little trouble Devlin had been and why was it, exactly, that he had to die?

However, as time went on, our bond grew by leaps and bounds. Every minute of the day became enriched by just watching them interact, play, romp, fight, sleep, even poop!... (the reader may recall me publishing snaps of them during their toilette). Their noises became sounds of joy that graced every minute with a glow. It's gotten insane. I mean mornings are a complete delight. Not that they weren't good before, it was nice to see each other again each day and Devlin was fun, but now, now it's beyond anything I could have imagined.

They sleep on you. If they could sleep in you they would, but since nature provided us with a barrier of skin, they curl up, under the covers, on top of your head, wrapped around your neck, nestled under your armpit, anywhere, as long as they're making contact. If there is an urgency for a potty break, Blu wakes one of us up by gently tapping our foreheads with his paw, but usually, it's a slow process with lots of snorting and stretching, punctuated by deep yawns, curled tongues and tightly closed eyes. They spring forth with what we used to call "snot showers" constantly. We now happily anticipate their "short-lived refreshing spritzes"... not unlike those intermittently given the neatly stacked veggies in the supermarket... as a means of waking up to watch them as they lay on their backs, head to head, and proceed to greet each other with wookie-like gutteral grunts, showers of snot and little growls as their paws investigate the frequent folds of each other's face. Their noises are a symphony of sound that we've even discussed recording and jamming to. See!! A bit much, right? Part of the process!

Enough! Unless you've been "Pugged!," all this patter rings hollow. As a somewhat recent convert myself, I remember thinking, pa-leeze, what's not to love, they are pups after all, but, I would never choose to own one! Happily, Tim thought otherwise, and I'll be forever beholden to him for that. 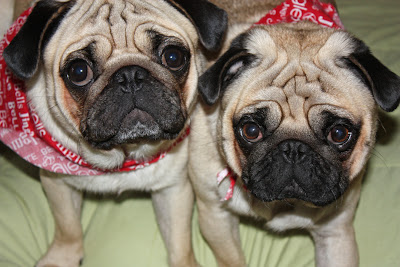 But, I think I know what happens. They come, from the womb, equipped with little pug pods that they deposit under your bed while you sleep. (for those of you too young, this is a reference to that chilling science fiction great "Invasions of the Body Snatchers!," original only please, although the re-make did scare the bejesus outta me too, there's just something about the black and white version with Kevin McCarthy running up and down the streets trying to warn folks in the opening shot). Digressing again.

Don't ask me how the pods get there, let's just put it down to the tooth and or pug godmother fairy thing, besides, we're talkin Pugs here! They are magical! Anything can happen...and usually does. So, the aforementioned pod patiently waits under your bed and matures, quietly morphing into your double, in every detail, except for one. Your brain. Then, one day, you wake up and you are different. You're the same in appearance, you walk and talk the same but your brain has been "Pugged!"

From that moment on your main concern is Pugs. It's that simple. I've been known to sit and watch them play for hours at a time. What pet owner do you know that retires to the back yard, after her husband leaves for work, with a cup of coffee and a camera to watch the dogs romp and play for an hour or two? If you know any Pug owners...a lot I'd say! I need an external hard drive just to contain the Pug pictures we've taken since they popped into our lives. It's sick!

So, those of you without Pugs in your life, heed this warning! I didn't pay attention when they told me that the Pug experience will be unlike any you'll ever have. But, if you do succumb, don't say you weren't warned. They will steal your heart, your dignity, your very soul. You'll be left with nothing, nothing but joy. It's terrifying for humans to be joyful...at least it is for me...for a sustained period of time that is.

I'd better go, it's time for their lunch. I made crepes. They love crepes. And, I'm dying to try out their new fuzzy harnesess for their afternoon walk and then I'll see if those adorable little jammies with the biscuits on them fit and after.....

Please, check under your beds! This can happen to you if there's even one in your home!
Posted by suzanneberry at 10:58 AM