BACK TO WORK and AN INCREDIBLE SURPRISE! 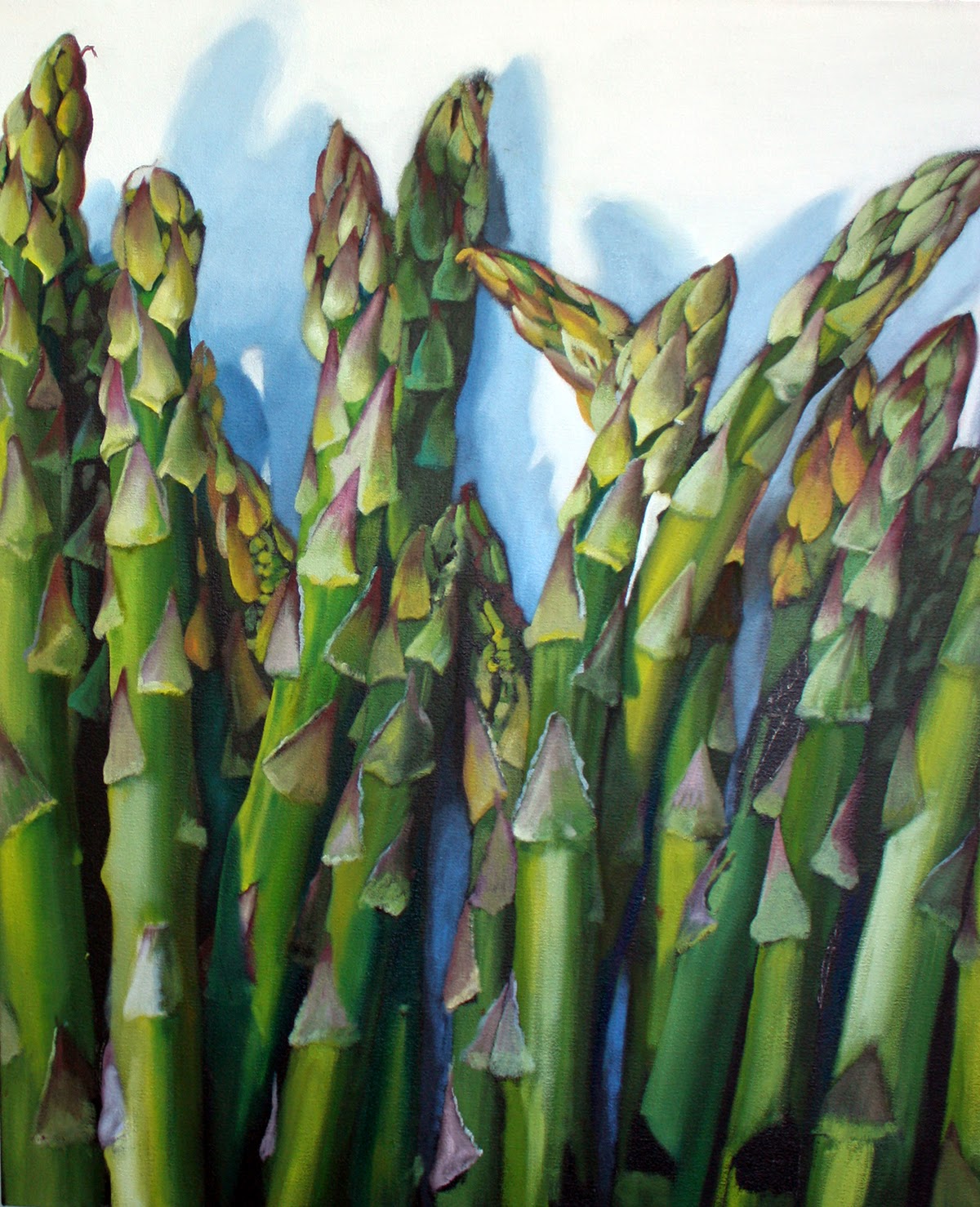 Well, at least I'm back to work! Last Saturday I was puttering about the kitchen and suddenly felt the urge to paint! Just like that! So weird. Before that I couldn't even consider going in there, actually thought for a bit that I would take a break just to see what happened. I'm glad it's back....whatever it is. Muse, Springtime, healthy eating, more wine...whatever...I'm just happy to feel that yearning again.

But it wasn't a bad thing this time...not wanting to work. I figure that these lapses happen for a reason so I did what Eckhart Tolle suggested and embraced it. Didn't fret or complain. At least I don't think so. Took a while to feel comfortable again though. I figured I'd jump back on the Sparrow's Ass...Berry speak for asparagus... and I'm glad I did.

It's like a giant puzzle, painting the pieces, trying to make them fit. Warm highlight, cool shadows, step back and it works! Sometimes. This is definitely the kind of piece that can become like a meditation. Just keep going because it's endless. I thought I was almost finished when I last worked on it but I found that certainly was not the case. I'm enjoying myself and have stopped trying to paint like someone else. Thank you for the support, I appreciate it so much. If the painterly quality is there, it will come out. I'm tired of not being grateful for what I can do. It's a silly waste of time...she said knowing she'll never be satisfied. 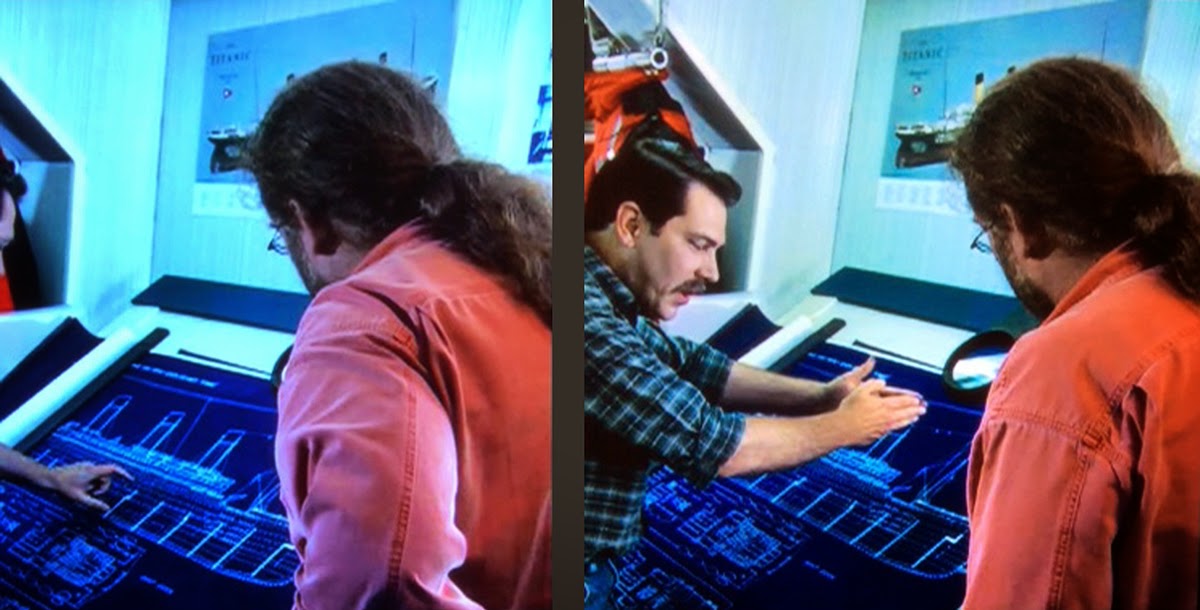 It was April 6th, a Sunday afternoon. As I've previously shared, I sometimes allow weekends for me to suck and so, not surprisingly, I found myself giving in and preparing to attend another pity party. It'd been a while since I'd heard from him...well maybe three weeks or so...and those feelings of being disconnected were collecting on my horizon, so I quietly asked him for a visit and made every attempt to cancel my planned attendance to the "woe is me" shindig.

The next morning I woke up and found an email from a dear friend featuring a snap of an absolutely fantastic, all-type design of the song title "You Are My Sunshine".  A friend of hers had created the design and she wanted to share it with me because she thought it was so well done. This song title shows up very often for me in one form or another since Tim left, so seeing the artwork sparked a giggle and some relief because, and I know Tim won't be pleased that I'm sharing this, we used to sing that song to each other constantly. Sorry honey, sappy and very uncool, but happily, very true.

Being intrinsically self-centered and in need of a sign, I decided it was his way of letting me know he was near using my dear friend as a conduit. Yeah, I know. This really smacks of thinking everything is about moi, however in this instance, I'm gifting myself a rather hefty pass. Later I thought it might be a bit of a stretch, however, I decided that since Tim told both notable mediums to tell me that whenever I think it's him, that it is him, why not embrace it and be happy.

Later that day, still nursing the need to climb into the pot, pity that is, I went upstairs early to get lost in television again. I channel surfed for a few and landed on a documentary that I'd seen before, and really enjoyed, detailing one of the historic dives to the wreck of the Titanic. As I settled in to watch I began paging through a magazine on my lap and casually glanced up at the screen. It took a moment to register but I recognized a very familiar form, did a double take and looked again, thinking I was surely seeing things!

For a few seconds I wondered why the screen saver snaps of Tim were there but I realized I'd never seen this photo of him and then it dawned on me that it wasn't my snaps but the documentary I'd just decided to watch! I stared at the screen in disbelief and grabbed my iPad and began pausing and snapping until the scene changed. In the snaps shown above the two men are discussing the blue prints of the wreck and the man on the right, in the red shirt with the pony tail, is the spitting image of Timothy Francis Berry as he looked from behind!!!

I couldn't believe it! I was elated! I kept rewinding to that portion and re-watching, blinking my eyes in total disbelief at what I saw. I decided to send one of the snaps to a few friends and some family to see if I might possibly be, again, loosing my stuff. One friend called me as soon as he saw it and before I even said hello he asked, rather put out...'when was Tim in a documentary about the Titanic and why didn't you mention it before now???'

I received other very positive responses of disbelief from close friends and family. And even though I've shared more than a few photos of Tim here, I certainly don't expect anyone who didn't know him personally to recognize the uncanny resemblance, however I had to share this stunning "coincidence" with you! I'm embracing this even if it is an incredible coincidence. The strange thing is that from the front this dude looks nothing like Tim, but from behind, every detail is him!! He even owned a shirt identical to the one he's wearing! And again, right after I asked him for a visit or a sign!

I know I've mentioned that I wanted to begin keeping these visits and messages to myself, I don't want to appear desperate or a little loopy, however this one was just too incredible not to share and besides, it's show and tell proof! Proof that I either saw a man on television that from behind looked exactly like Tim, which is just fine with me or he's sending me support and love using the television again!

He loves to do that!
Posted by suzanneberry at 1:35 PM