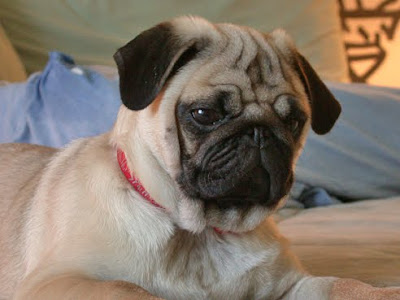 First, an explanation of the name. Red became Raz, to go better with Berry. Raz then became Razzle Dazzle which then morphed into The Daz Man...occasionally. You know how your dog's name becomes unrecognizable at least midway through his or her first year.

Anyway, yesterday morning, there we were the four of us. Snug as bugs in a rug. I was happily reading my book, himself has Monday's off so he was dozing softly beside me, Blu curled around his neck, a snoring, furry loving collar and Raz was down by my foot, hugging the edge of the bed as he is wont to do, my foot and leg on guard, keeping him from falling. We were all sooo cozy and happy. The next thing I knew I felt Raz roll over my ankle and topple off the bed to land on the carpet with a soft thud. I wasn't too alarmed, obviously, keeping them from falling off the bed is a good idea but both of them had been jumping off more recently before we had the chance to stop them. I got up to pick him up and noticed he was limping.

Long story short...yeah, I know, too late...he broke his little hip! What that means is his joint came out of the socket and now has to be removed. What??? Apparently, the muscles hold everything in place in small breeds so they don't need the ball joint.

We had a really blue Monday around the Berry household I can tell you. Our perfect little baby now has to have surgery, FHO surgery to be exact, on top of having his little pebbles removed soon. After a somewhat lengthy recovery, she said he'd be almost as good as new.

Until then, unfortunately, The Daz Man Limpeth.

Posted by suzanneberry at 12:56 PM