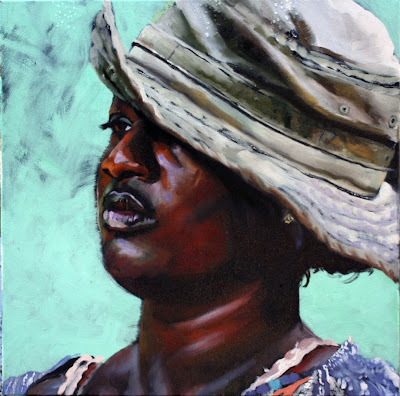 This painting has caused quite the ruckess (how does one spell ruckess?) here at chez Berry. Himself was adamant that I not touch it again and call it finished. I disagreed... quite loudly I might add. "I'm just giving you my opinion," he asserted, following a rather boisterous accounting of comments on my blog that agreed with his "opinion." We had quite the discussion about what encompasses "giving an opinion." I posited that if one is just giving an opinion, one states that opinion and then shuts the hell up! Proof positive that what Mr. Berry was expressing was not an opinion.

It's an unsettling feeling because, as you know if you're an artist, one becomes quite intimate with a work in progress. And it seemed every time the subject came up I was warned not to touch it. In his defense though, I do the very same thing to him. He created a 40x40", oil on canvas caricature of Ani DiFranco some years back and overworked it to within an inch of it's lovely little life and I, being the loving wife that I am, have not let him forget it. Payback is, as they say, a beeeatch!

While I certainly appreciate the compliment, I was looking forward to working on the painting and found myself quite afraid to touch it. It's been a few weeks and today I was feeling rather full of myself and confident in my vision and decided to carry on.

Himself hasn't see it yet. We'll see.
Posted by suzanneberry at 4:16 PM