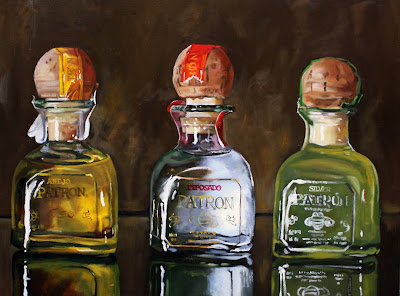 Whenever I look at these proud stubby little bottles with their soft round crowns of cork, I imagine them as an integral part of some perverse nativity scene... barely visible through the grime shrouded window of some downtown bar.
They just look majestic somehow. Can't explain it. There's something cuddly about those shrunken down bottles of spirits on the shelves behind—or just adjacent to—the cash register in liquor stores. It looks as though some prone to practical jokes wizard dropped by for a bottle of red and with a wave of his wand miniaturized an entire section of the store. They never really quite look proportional though do they.
These puppies are from last summer. They were our "germ killer" of choice, bought to chase down two dozen little neck clams, served on a bed of crushed ice and garnished with beautifully arranged green leaf lettuce. I remember it clearly because I had planned to snap a shot of the small feast. Ripe with the smell of ocean tides and dotted with the best homemade cocktail sauce on the planet, courtesy of himself, I thought it might make a nice daily. But we dove in and finished 'em off before I could so I shot the kings instead.
Still a lot of detail to finish up, but I have to stop and get some deadline work done so I thought I'd post it now. I tried for a looser look, I held the brush a la Master Hein and left fresh strokes but alas, it still looks tight and overworked. I'll get there. I'm feelin' optimistic and positive. The boys are sleeping under my chair, gently snoring and floating the occasional air biscuit. I swear, one would expect they'd float to the ceiling with all that gas inside such a small area. I think we're all getting into the groove and mom can work now without crating them, most of the time anyway.
Wish I had some little necks.
Posted by suzanneberry at 2:34 PM