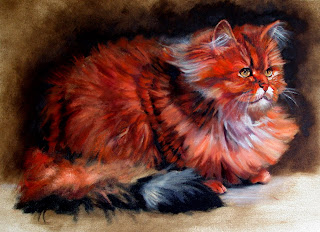 16x20"
oil on canvas
donated
This is Max. I named him/her myself because the reference used for the portrait was taken from a published book. I have a friend, who is probably the closest thing to a patron saint all felines and canines in the continental southeastern United States have. She works tirelessly: saving, rescuing, nursing and defending our four legged friends, regardless of their species come to think of it. One of the kindest people I've ever met, she'll do everything she can for anyone, even if they mistreat her, however, if she should happen upon any human being mistreating any animal, at any time, in any place, she will get medieval on their ass in a nanosecond. I've seen it. It's not pretty. Anyway, Max was donated to her shelter.
Digressing! Anyway, during the computer melt-down we finally decided to fix my first iMac with "shut-down whenever the hell you feel like it" disease, which gave me access to some past portrait commissions. A cushion for those difficult daily days, no?
Meet Max, today's cushion.
Posted by suzanneberry at 8:06 AM